Dina Wahba and Nayera Abdelrahman explore new ways of thinking about migration and home-making. They seek to create safe spaces for personal encounters and creative expression. Podcasts, art installations, and stories reflect upon the various experiences of young academics, artists, and activists in negotiating identity, belonging, and home.

Your workshop and public event on exile and home-making last March in Berlin were both very successful. How did the idea for the workshop develop?

Dina: We’ve been in Berlin for two years, and wanted to better understand our own experiences and those of the people around us. But my frustration with academic institutions also came into play. We wanted to find out if there was interest among young researchers in doing something more experimental outside the academy, something that would mix academia with different forms of expression.

Nayera: The workshop was also an opportunity to test our own capacities in a new environment—Berlin—not Cairo, where we come from. Initiating something outside our comfort zone was a challenge.

Why did you choose to work with and through art—with installations, podcasts, and storytelling?

Nayera: I was inspired by the history workshops I was involved with in Egypt (ehky ya tarikh—“speak history”), exploring the specific histories of marginalized communities in Egypt through different historical sources and then renarrating and recreating them in artistic ways. We want to get academia “out of the written word” and try various creative ways to develop the arguments we usually only write about.

Dina: In the workshop we talked a lot about feminist methodology, conducting feminist research, and trying to produce feminist knowledge. The workshop was also a home-making practice for us. It was a way to make Berlin our home. That way we felt like active agents who don’t just consume education but also produce knowledge.

What was your specific interest with regard to gender in migration and home-making?

Dina: Throughout the workshop it was striking how gendered the idea of home is. In Egypt home is seen as a woman’s space. It has always been a restrictive space, part of the patriarchal system. But when I came to Germany and made my own home here, I began to reflect on how it’s more complicated than just thinking that in the power struggle the home belongs to women. It can also be an empowering idea.

It was interesting for me to think through some of the mainstream patriarchal narratives concerning home and women in the home and be a little bit more inquisitive and question that, also in a migration context. A lot of work has been done on how women in migration can be more vulnerable, for example as mothers. It was important to us as women who are bearers of values and culture to analyse how we make our home in a migrational context and reproduce certain aspects of our homes. For example: in the workshop we discussed how we want to reproduce certains senses of warmth in our homes, but are also aware that we don’t want to reproduce the gender norms we grew up with. We tried to collectively reflect about this without the stereotypical image of “patriarchy” versus “freedom”, or “Egypt” versus “Germany”.

You declared the workshop a space to “unlearn”. What do you mean by that?

Dina: We didn’t romanticize home as a perfect place we want to reproduce here, but were thinking about what we’re constantly consciously and unconsciously unlearning. At the core of our discussions were gender relations. We talked about masculinity. The male participants in the workshop discussed how they need to unlearn being macho or acting in a certain way.

Nayera: We discussed unlearning academic performance. It turned out to be a fine line between not performing as academics on one hand, but not rejecting academia as a whole on the other. We are doing this to reach a wider public and discuss ideas in different ways than just writing.

Dina: The German and Dutch participants were all researchers working on the Middle East. It was interesting to see how they negotiated their place in the group and reflected on their own positionalities as researchers and European citizens. They felt safe to critically reflect upon their own privileges and stances. At some point they had a conversation with an Egyptian woman who talked about racism in Germany. At the end the German participant began crying. There was a heartfelt moment when she said that every time she listened to the podcast—which they were very proud of—it made her feel sad. It meant we managed to create a space where people really listened to each other. It was clear from the beginning that we did not want a space where we would invalidate each other’s experiences.

Nayera: The personal is political. Most of the podcasts and stories we developed during the workshop were personal ones and power dynamics were reversed through those stories. We’re in Berlin, where academia is of course very Westernised. But in the workshop space we had the chance to think differently. For many of the academics attending it was the first time they had the opportunity to express themselves other than in writing—by telling a story, doing an art installation, or by being part of a collective group process.

One subject you discussed is violence, trauma, and homelessness. Can you explain  a bit more about that?

Dina: We were thinking a lot about the dreams and expectations associated with migration processes. Discussing exile, we didn’t want to ignore the violence implicated in these processes. As we discussed dreams of a better home we also discussed the traumas of this experience, but also how traumatic homelessness can be. You can be exiled in your own country if you experience violence. The trauma you experience makes you feel homeless in your home country. Migration and the prospect of finding and creating a new home can become empowering experiences when you come from an experience of estrangement in your own country.

We were also keen to explore the chances and opportunities that come with migration. We were interested in the concept of “home as skin” developed by Sara Ahmed.[1]

Nayera: The main idea was to create a space for people to express their feelings about home and home making. If it was a romantic idea of home then that was OK, if it was about reinventing oneself and creating a new home, that was OK as well.

What are specific home-making practices you discussed?

Nayera: What I shared from my own experience was that, whereever I go, I need to put things on the wall to feel at home. This has a history back home, where sometimes I felt like I didn’t own the space I lived in. Wherever I travel I start to change the space. Another thing is the sounds – or rather the noise. This is something that I really miss from Egypt. I feel the urge to recreate this here, and always have lots of friends over to my place. Back in Egypt I grew up in a house that was always full of people.

Dina: Food is very important to us. In the workshop we also had a reading about food and the home-making practice related to that. Every day in the workshop we discussed what we wanted to have for lunch and invited participants to bring their own food, something that reminded them of home.

What did you find most interesting in the context of “home-making”?

Nayera: It’s important to look at the nuances. Some communities recreate the same power dynamics, particulary in terms of gender relations.

Dina: We were very critical about that. We are not romanticising all home-making practices, but saying that there are ways of recreating practices in order to feel at home here, like in food and business. We are also critical of certain practices that come with problematic gender dynamics. So we’re critical of our own society but we also have to see that certain practices are rather an attempt to own this place.

We discussed Sonnenallee and had two talks about it. One was by Samil Sarikaya, a Turkish academic who has researched small businesses on Sonnenallee. He talked about gentrification and the political economy of Sonnenallee and the tensions between the Turkish and Arab communities. We had an Egyptian researcher, Iskandar Abdalla, give a talk about how we have to think differently when we talk about Sonnenallee and how important it is to present different stories that counter the mainstream narrative of Sonnenallee as a “no-go area”. He presented the mainstream media narratives of Sonnenallee and the Arab clans and then showed us a very beautiful artistic picture that he took on Sonnenallee in autumn, showing a beautiful tree with coloured leaves, and remarked that this is also Sonnenallee. What he meant is that you can project a “no-go area” and Arab clans onto Sonnenallee, but you can also project the beauty of the place. He wanted to push people to think differently.

Nayera: He said every representation is a misrepresentation. With Sonnenallee, we wanted to visualize the concepts that we discussed during the first days and think about real-life problems, like the workers in Sonnenallee who are ill-treated and poorly paid on the black market.

Did you discuss the rise of right-wing movements? Are there anxieties among the community?

Nayera: Actually this came up in the very beginning of the workshop. Heimat is not a left-wing concept but rather one that is used by right-wing parties, so we discussed a critical approach to the concept of Heimat.

How do you plan to continue?

Dina: Unfortunately academia is becoming increasingly irrelevant. How can we break out of our academic bubble and get engaged?  That’s why we want to continue to offer spaces where knowledge production and discussions can be part of a wider struggle and feed into it.

Nayera: It matters to us that we shape the research agenda. We want to take this issue further as it is important to us, both professionally and personally, and we want to create spaces for people who otherwise wouldn’t have the opportunity to work on this topic or to exchange with others.

Dina Wahba is currently pursuing her PhD at the Freie Universität Berlin on “Politics, Emotion and Affect within the dynamics of Tahrir square”. Dina is a women’s rights activist who has worked on a number of gender issues such as sexual and gender based violence, leadership, political participation, and empowerment. Her recently published thesis is titled “Gendering the Egyptian Revolution.

Nayera Abdelrahman is currently a PhD fellow at the Berlin Graduate School for Muslim Societies and Cultures at the Freie Universität Berlin. Her research project interrogates the concept of home by studying the 1967 forced migration of Egyptian cities affected by the Suez Canal cities.Nayera co-organized the first History Workshops in Egypt (Ehky ya Tarikh)to explore the social and political histories of marginalized communities in Egypt that were renarrated through means of art.

[2] Street in Berlin’s Neuköln neighbourhood that is sometimes refered to as “Arab street”. 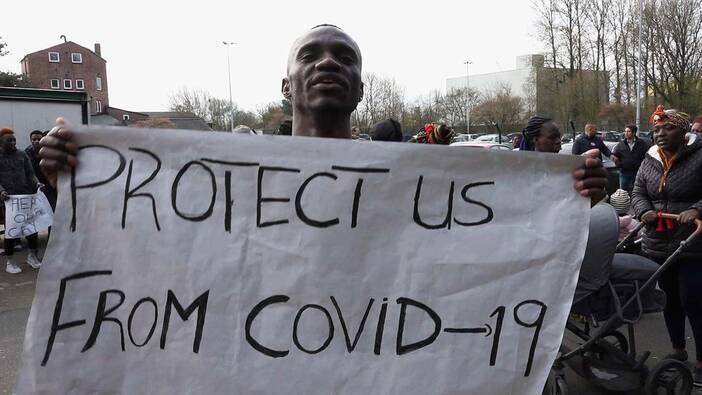 How have conditions for asylum seekers in Bavaria worsened under the pandemic?