On 30 October, Chile pulled out of hosting the UN climate summit due to the protests raging across the country; two days later, it was confirmed that Madrid would host the summit instead. This announcement was immediately followed by a flurry of communication between Chilean and Spanish (climate) activists. How would they ensure that critical Chilean voices retained their prominence at this COP—which was supposed to have been a Latin American one? How could an alternative summit be mounted in Madrid in just four weeks? How might cooperative links be established between actions at the summit and demonstrations in Chile and Spain? Who would still travel to Santiago, and who would now journey to Madrid? Who would organize which events where, meet which allies, organize which protests?

In both Santiago de Chile and Madrid, the answer is clear: both cities possess civic networks that are strong and creative, and that pull together. Hundreds of volunteers in Santiago and Madrid have put massive amounts of energy into organising three major multi-day events—each adequately funded and allocated sufficient space, provided with accommodation, catering, and translation services, and accompanied by a full programme incorporating art and culture, and often culminating in demonstrations—sometimes at very short notice. In Chile, around 600 people have come together under the slogan #NoHayCOPSiHayCumbre (This is no COP—this is a people’s summit!) at the “Cumbre de los Pueblos 2019” (link to Facebook) and “Cumbre Social por la Acción Climática” events, while the “Cumbre Social por el Clima” in Madrid is being attended by around 1000 participants. The streets have also been full of people: despite the governmental repression of recent weeks, 30,000 people took to the streets in Santiago on December 6, and in Madrid half a million were present for the “Global March for the Climate”.

In Santiago de Chile, the primary subject of discussion has been the role of communities in the fight against the climate crisis, with other conversations also exploring topics such as the fundamental critique of extractivist economic models, the development of alternative climate-friendly social structures, and how best to make space for migrants in the struggle. “In recent weeks we’ve been testing new organizational forms and new ways of approaching the political system. Now we’re deepening these approaches, discussing them further, and translating them into demands”, explains Lucio Cuenca of the environmental group OLCA, a partner organization of the Rosa-Luxemburg-Stiftung and one of the main groups behind the “People’s Summit”. “Following the Chilean president’s decision to abdicate responsibility for the consequences of his policies, we want to consolidate our demands and develop counter-strategies”, he adds. Discussions continue to focus on people’s expectations and perspectives in relation to the constituent assembly, which, following a hotly-debated agreement between the government and a majority of opposition parties, is set to be elected in 2020. The particulars of the assembly are still to be ironed out.

The extent to which the precise configuration of any new constitution is closely connected to environmental and climate issues becomes clear when one considers the example of water. The Water Code enshrined in the 1980 constitution introduced under Pinochet provided the framework for the total privatization of water in Chile, thereby serving the interests of mining companies, agribusiness, and those with investments in forestry. “Three quarters of Chile is currently experiencing extreme drought”, Cuenca says. “Despite this, the Piñera government wanted to further expand the privatization of water in order to provide corporations even more security on their investments.”

The alternative summits, made up of over a hundred events, have primarily been shaped by their Latin American participants, although they are being attended by activists from all around the world. Discussions have by no means been limited to debates around the situation currently unfolding in Chile, with additional discussion topics including attendees’ varied experiences of constitutional conventions in the region, as well as the background to the protests also currently occurring in Bolivia, Ecuador, and Columbia and the parallels that can be drawn between them and the situation in Chile. Side by side, survivors of Pinochet’s military dictatorship and younger generations have engaged in collective reflection on the different forms that buen vivir, the good life, might now take. Additionally, the summit has published a declaration which includes the movement’s key demands. The declaration also condemns the fact that despite the intensity of the state violence deployed by the Chilean government against its own citizens, it has managed to retain the presidency of the COP25 summit.

With around 300 related events, Chilean and Latin American activists and issues have also taken up plenty of space at the “Cumbre Social por el Clima” in Madrid, with the summit as a whole placing strong emphasis on voices from the Global South and indigenous communities. “COP25 should be taking place in Chile,” says Angela Valenzuela of Fridays for Future Chile. “We are striving to ensure that voices from our part of the world are heard here.” This is important, as the protests threaten to be overshadowed by the extremely complex and multi-faceted negotiations taking place inside the UN conference centre, even if some more critical side events, such as one on the subject of Alto Maipo, are also taking place. Chile’s holding of the COP presidency means that such subjects are of course being swept under the rug. In contrast, the “Cumbre” has been dedicating considerable time and space to these topics, which include strategic networking, agrarian ecology, the exchange of practical knowledge and resistance tactics aimed at countering REDD+ projects, land rights, and feminist networking.

A fundamental commonality connects the demonstrations, protests, and activities occurring in Santiago and in Madrid: the feeling of an ever-expanding disparity between the pressure generated by millions of people taking to the streets worldwide, on the one hand, and the business-as-usual approach of national governments on the other, between the rapid progression of the climate crisis and political responses to it. This discrepancy can be neatly illustrated by a single number: since the adoption of the Paris Agreement, global emissions have gone up by four percent. This feeling of disparity is further strengthened by the fact that large corporations and banks such as Santander, Suez, Iberdrola, and endesa are all sponsors of COP25, meaning that their lobbyists are able to influence negotiations. In contrast, the “Toxic Tour” through Madrid, which sought to highlight the disastrous influence of said banks and corporations on the climate crisis, was shut down by police.

Attempts to Exert Influence at Very Many Levels

The organizations, groups, and NGOs with observer accreditation at COP25 are attempting to gain influence and exert pressure on a number of different levels within the context of negotiations. Although the previous year’s climate summit yielded a set of rules for the implementation of the Paris Agreement, the UN response to the climate crisis, as ever, continues to proceed at a much slower pace than the crisis itself. Many of the aspects up for negotiation seem to be heading catastrophically in the wrong direction: participating countries continue to haggle over the configuration of market mechanisms for carbon trading, despite experience showing that such measures simply get in the way of the urgently necessary transformation of the economy and could have devastating consequences for both humans and nature. The extent to which the logic of profit is supposed to be able to function unimpeded is made clearly apparent in that even the smallest reference to the enshrinement of human rights and other safeguards, such as on women’s rights, threaten to be struck from the corresponding article of the Paris Agreement rulebook.

In addition, a key issue for this year’s COP is the fact that the industrialized countries continue to refuse to even discuss the fact that they will need to make substantial financial contributions to compensate for the extensive damage already caused by the climate crisis up to this point. Nor have countries agreed upon a shared timetable for the announcement of their individual climate targets (NDCs) and accompanying measures. The lack of coordination is disastrous, in that this mechanism is crucial to the Paris Agreement rules, forming as it does the foundation of the system used to regularly assess whether the efforts of the global community concerning the climate crisis are in fact adequate. Meanwhile mechanisms and technologies such as carbon trading, nuclear power, and carbon dioxide storage technology, which make it possible to cash in on the climate crisis, are given support.

Thankfully, national representatives are not able to negotiate such matters in secret. This is due to the efforts of representatives of social movements—particularly those from the Global South—to hold negotiators to account, speaking with them at summits and conferences, exerting pressure on their own delegations, and reporting their findings back to those in their home countries in order to increase support for ambitious policies to tackle climate change. Through creative initiatives at the summits themselves, expert knowledge of the negotiations, public relations work, conversations with delegates, and networking with other activists on-site, social movements close to the negotiations are doing their best to monitor them with a critical eye. Activists are also always quick to remind one another that they must use the privilege of being able to travel to the UN summits effectively and strategically, in order to exert as much influence as possible. Where are there windows of opportunity? Where is there momentum to be harnessed?

Along with the aforementioned strong links between activists in Santiago de Chile and Madrid, alliances have formed between indigenous peoples, grassroots organizations, civic organizations, feminist groups, NGOs, and other activist groups the world over to create an increasingly dense web of resistance against a dramatically advancing crisis that spans the entire planet. These civic networks are strong and creative, and pull together—but unfortunately their protests have so far had little effect in the real world. Emissions continue to increase and fossil-fuel companies are permitted to go on as usual as if nothing was wrong, while millions of people are forced to endure the increasingly dangerous effects of the climate crisis.

Greta Thunberg is right when she says that “we have achieved nothing so far”—climate justice movements must become much, much stronger before they will be able to achieve their desired aims, a project that requires each and every one of us to get involved.

Our commentary on COP25 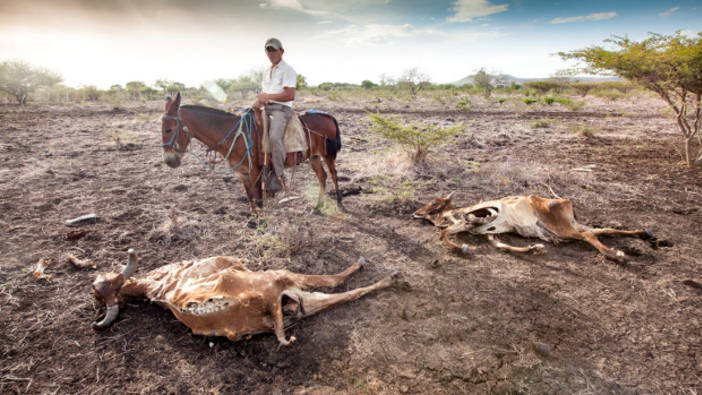 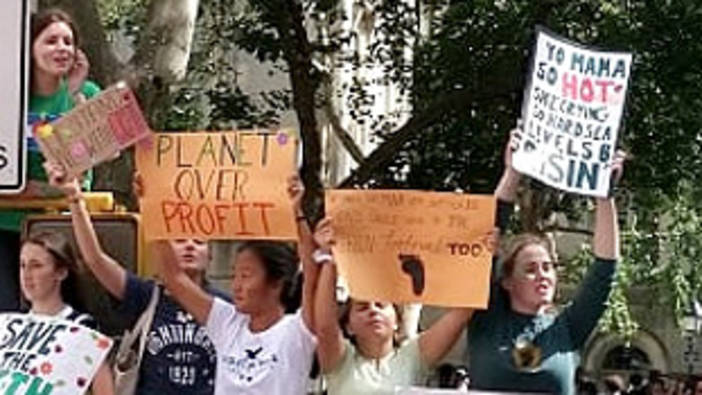