For more than two decades, the global community has been struggling to restructure the climate change policy regime started in 1990 [1]. In the absence of well-defined policy guidelines and necessary action for mitigation and adaptation, climate change-induced loss and damage have become a reality by now. Scientific and empirical research is providing ample evidence of the loss and damage resulting from climate change impact. The recent “Special Report on Global Warming of 1.5°C” by the Intergovernmental Panel on Climate Change (IPCC) stated that economic and non-economic losses and damages associated with climate change have been gradually increasing, especially in Small Island Developing Countries (SIDs) and Least Developing Countries (LDCs). The accelerating speed of climate change is posing a serious challenge for the global community to design policy and institutional frameworks capable to deal with the losses and damages incurred by life and livelihood, property, environment and ecology, values, culture, heritage, territory, and so on.[2]

M. Hafijul Islam Khan (Hafij Khan) is director of thje Centre for Climate Justice-Bangladesh (CCJ-B) as well as an environmental lawyer and climate change negotiator. Nadja Charaby is Head of the RLS International Politics and North America Unit and a senior advisor for Climate Policy at the Rosa-Luxemburg-Stiftung in Berlin.

In 2015, by including a standalone article in the Paris Agreement, the signatory Parties to the UNFCCC accepted loss and damage beyond adaptation measures as the third pillar of the international climate change policy regime. Already back in 2013, the Parties to the UNFCCC established an international mechanism, called the Warsaw International Mechanism (WIM), for addressing loss and damage associated with climate change impacts under the adaptation framework. [3]The Paris Agreement helped further entrench WIM and provide further guidance and authority for averting, minimizing, and addressing loss and damage beyond adaptation.[4]As a result, WIM now operates under the authority of both the UNFCCC and the Paris Agreement, endowing it with a unique opportunity to put forward the policy guidance needed to adequately address climate-induced loss and damage. On the other hand, the tensions resulting from having to regulate WIM under two distinct international instruments pose critical governance challenges for ongoing climate negotiations.

An Executive Committee has been established to implement WIM’s mandate. This Executive Committee is composed of different expert groups including, as stipulated by COP decisions, experts on non-economic loss and damage, comprehensive risk management and transformational approaches, and a task force on displacement. WIM is developing and might even be enhanced and strengthened, as mandated by the Parties to the Paris Agreement (CMA).[5] Strengthening the processes of WIM, particularly the review processes agreed by the Parties to the UNFCCC, provides great opportunities to assess gaps and challenges, and to enhance WIM’s ability to further deliver its goals effectively.

The Parties to the UNFCCC conducted the second review of WIM at COP25 in December 2019, resulting in some important decisions for enhancing WIM. The Executive Committee of WIM is requested to engage in dialogue with the Standing Committee on Finance (SCF) and provide input that will assist the SCF in providing information, recommendations, and draft guidelines for the operating entities of the Financial Mechanism. In terms of institutional structure, the Executive Committee of WIM has the task of establishing a group of experts dedicated to addressing the loss and damage associated with the adverse effects of climate change by the end of 2020. COP25 stipulated some basic procedures and functions for this expert group and requested that the Executive Committee further elaborate on it.[6] As an additional component of WIM, COP25 also established the Santiago Network for Averting, Minimizing and Addressing Loss and Damage without any specific timeframe and procedures.[7]

The challenge now is how to implement the conclusions of the second review in a way that enhances and strengthens WIM to deliver its functions effectively. The key priority under the work of the Executive Committee of WIM is to establish an expert group that can identify and facilitate required actions, and support the needs of vulnerable developing countries effectively. As a result, the meetings of the Executive Committee in 2020 are crucial for further strengthening the work of WIM. Hence, this brief provides a review of the outcomes of the 11th meeting of the Executive Committee of WIM held between 10-12 March 2020, and offers some thoughts regarding the impact of the on-going Corona virus pandemic on these meetings.

The 11th Meeting of the WIM

Due to the COVID-19 outbreak, the secretariat of the UNFCCC announced on 6 March 2020 its decision to avoid in-person meetings in Bonn and elsewhere between 6 March and the end of April 2020. In response to this, the Co-Chairs of the Executive Committee of WIM decided to hold its 11th meeting virtually (ExCom 11). This virtual meeting implied limited participation and engagement from officially registered observers. Members of the Executive Committee were concerned about the inclusiveness and productivity of discussions held in the virtual realm, and the inability to cater to different time zones and access a stable Internet connection. Some Executive Committee members also emphasized the need to include the outcomes of COP25 discussions on action and support in the agenda. It was only after a long debate that the agenda was adopted and agreed upon.

The 11th meeting of WIM also decided to launch several further expert groups, like the Expert Groups on Slow Onset Events and Process, the Expert Group on Non-Economic Losses and Damages, the Expert Group on Action and Support, established in accordance with the decisions of COP25, and to develop their terms of reference (ToRs) with the assistance of the Secretariat. COP25 provided some guidance for how to financially compensate climate change-induced loss and damage, and asked the WIM Executive Committee to take further collaborative action with the Standing Committee on Finance (SCF) and the Green Climate Fund (GCF). In effect, the 11th meeting of WIM decided to initiate a necessary collaboration with the SCF and the GCF in order to mobilize and access resources for loss and damage-related activities. Taking into account the COVID-19 situation and the significance of intersessional work, the 11th meeting of WIM also discussed ways for supporting this kind of work, including organizing live virtual discussions and teleconferences. Moreover, considering the uncertainty of the COVID-19 situation, the dates for next Executive Committee meeting have yet to be discussed.

Moving Forward despite the Pandemic

While the Corona pandemic poses a thread for human civilization, we must not forget that it will affect mostly vulnerable and poor people and communities. Combined with the negative impact of the climate crisis, like loss, damage, and climate-induced migration, the fallout of the pandemic adds another layer to existing inequalities on this planet. Delaying the urgently needed steps for limiting the catastrophic impact of climate change is not an option. It is encouraging to see that the Executive Committee agreed to continue their works virtually and is continuing to try to implement their goals taking into consideration the particular outcomes of COP25. Given that the work will have to continue virtually, the challenge remains to ensure the inclusiveness of discussions and that negotiators can remain productive. Virtual meetings provide limited scope and space for ensuring inclusive decision-making processes. Considering that observers have been providing relevant ideas and technical support to the Executive Committee’s members for the last seven years, registered observers must have more space for effective participation and engagement, Another important point is how to involve national stakeholders—including the national contact points for loss and damage—in discussions and decision-making processes, as agreed at the 11th meeting of WIM.

[3] The adaptation framework was established under the Cancun Agreement and provides a global framework to promote cooperation to build resilience to climate change impacts and coordinate adaptation support. Decision 2/CP.19, Warsaw International Mechanism for Loss and Damage Associated with Climate Change Impacts included in the Report of the Conference of the Parties on its Nineteenth Session, 11–23 November 2013, in Warsaw. UN Doc. FCCC/ CP/2013/10/Add.1, 31 January 2014, para.1. 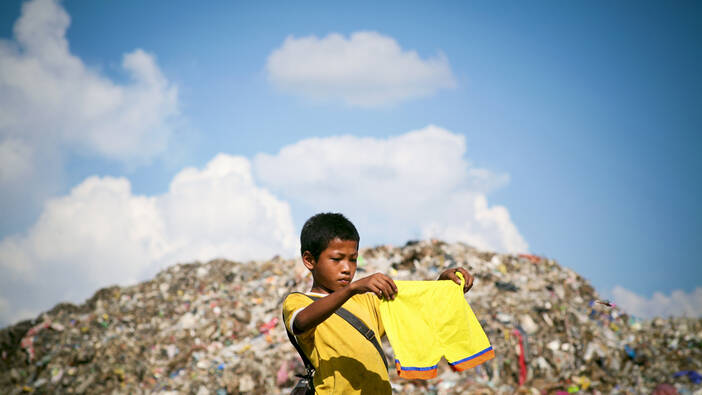