Every social crisis, whatever its nature, is an opportunity for change. The direction of this change depends on the state of power relations and dominant ideas. The coronavirus pandemic is no exception. With the high number of casualties it continues to inflict across the globe, the coronavirus strikes at humanity’s most vulnerable. At the same time, it forces us to break away from a certain intellectual conservatism and reconsider ideas and proposals hitherto held to be “unthinkable” or even “utopian”. By exposing the limits of the intellectual orthodoxies in force until now, the COVID-19 crisis offers fertile ground for critical, alternative thinking. Thus, if there is one glimmer of hope, it is its rehabilitation of the “utopian function”—of the function of bearers of concrete utopias, of intellectuals.

Ndongo Samba Sylla is a Senegalese development economist at the Rosa-Luxemburg-Stiftung’s West Africa Office in Dakar. This article originally appeared in maldekstra #8.

Seizing the present crisis as an opportunity for progressive change was the main message of the open letter signed by over one hundred intellectuals from the African continent and diaspora that was published in April 2020. Coordinated by Lionel Zevounou (Associate Professor in Public Law at Paris Nanterre University), Amy Niang (Senior Lecturer at the Department of International Relations, University of the Witwatersrand), and the author of this article, the letter intervened in a context where catastrophic predictions about Africa’s fate in the pandemic were already circulating.

As a collective, we felt that it was not worth responding to such speculation, and that we should instead call upon African governments to rise to the challenges of the moment. We asked them to handle the pandemic with originality and tact, to govern with compassion, and to avoid mimicry. Our view was that the kind of total lockdown observed in many Northern countries would be counterproductive given the structure of African economies, which are dominated by the informal sector. Rather than forcing an impossible trade-off between the health and economic survival of African populations, we recommended they find a responsible balance based on the continent’s experience in managing previous health crises. Beyond the health emergency, we urged them to see the pandemic as an opportunity to radically change the continent’s development path. For, ultimately, our conviction is that Africa has sufficient human and material resources to aspire to a civilization of abundance and equality, where the dignity of all is respected.

Endorsed by leading figures such as Nigerian Nobel Literature laureate Wole Soyinka, the open letter generated unexpected media success and enthusiasm, reflecting the general public’s desire to see African intellectuals mobilize collectively to reflect on the continent’s problems and challenges. Since then, we have felt obliged to go further. The collective of signatories, which has meanwhile expanded to more than 200 people from the arts, letters, social sciences and natural sciences, is being structured into a Pan-Africanist intellectual movement, scheduled to launch in the coming months.

In the meantime, multidisciplinary working groups on the African continent and among the diaspora are being set up. These will reflect on the challenges of the transitional period we are currently experiencing and try, more generally, to lay down principles for a radical transformation of the continent in the service of its peoples. Research will be devoted to topics such as Africa’s place in the emerging new world order, how to regain Africa’s economic independence, the need to redefine the relationship between state and citizenship, the role of the arts, sciences, endogenous knowledge, and culture in the social change that African populations are demanding, and more. The movement’s research work will be made public and disseminated as widely as possible in 2021. We would therefore be delighted to collaborate with individuals and institutions interested in our work.

Our open letter also paved the way for other Pan-Africanist and internationalist approaches with similar ambitions. A collective of more than 300 African feminists issued a statement calling for a shift away from neoliberal policies, which weaken the social position of women in particular, toward alternative economic policies that strengthen the resilience of African economies as well as equality between men and women.

Similarly, a declaration calling on Africa to reclaim its economic and monetary sovereignty was published two months ago. Translated into nearly 50 languages, including African languages, and signed by around 700 academics, activists, and organizers from around the world including many leading economists, it recommends that African leaders turn away from problematic development strategies promoted by international financial institutions such as the liberalization of foreign trade, investment, and finance. Rather, it advocates for an economic framework focused on full employment, social protection for all, food and energy sovereignty, and ecological transformation. It also argues for more inclusive policy frameworks on the African continent, as well as an international economic system that gives more room for manoeuvre to the countries of the Global South.

It was no coincidence that this last declaration was initiated by Fadhel Kaboub (Denison University, US), Kai Koddenbrock (Goethe University, Frankfurt), Maha Ben Gadha (RLS, Tunis), Ines Mahmood (RLS Tunis), and the author of this article. The same group had organized, supported by the Rosa-Luxemburg-Stiftung, the first session of the conference on “The Quest for Economic and Monetary Sovereignty in 21st Century Africa” in November 2019 in Tunis. The second session is scheduled for November 2021 in Dakar. This declaration thus constitutes a link between these two sessions, as well as also a call to bring together personalities, initiatives, and movements fighting in a spirit of international solidarity for the creation of economic systems at the service of peoples.

Emerging from the pandemic, finding a path that leads humanity towards a civilization qualitatively superior to capitalism represents the central challenge to societies everywhere. Faced with the inertia of habits, interests, and established powers, the struggle must continue! 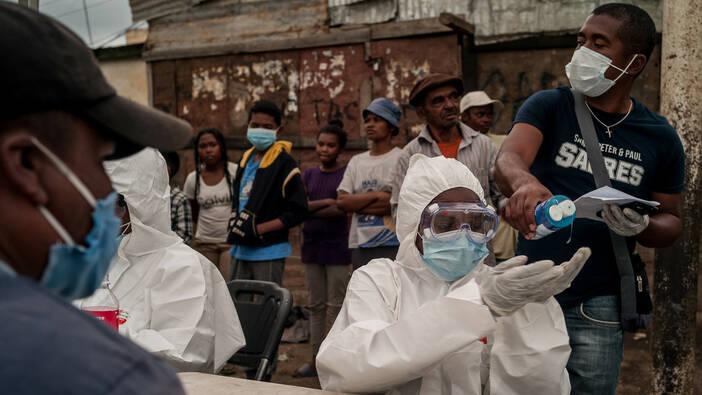