Refugee shelters in Germany took on prison-like characteristics in many places during the COVID-19 pandemic and developed into hotspots of dynamic infection events. For many residents, the pandemic significantly worsened their already stressful living conditions. The protest of the residents, however—despite repeated resistance to the lack of infection protection in various shelters—often received little public attention.

As part of the research project “Endangered Lives. Everyday Life and Protest in Refugee Shelters in the Wake of the Corona Pandemic”, Nikolai Huke conducted 16 interviews with residents in German, English, French, and Farsi. The interviews reveal an appalling picture of living conditions in refugee shelters in many respects. The problems described range from racism, inadequate medical care, noise pollution and lack of privacy, to traumatic experiences due to deportations and violence from security forces. In this first interview, Huke spoke with Tareq Salem (name changed) ´about his life as a refugee and his many days in quarantine during the COVID-19 pandemic in Italy and Hamburg.

NH: Where did you enter the European Union?

TS: I crossed the Mediterranean to Italy. It was very dangerous. It took us 35 hours. I was on a wooden boat with 29 people, with four families, children and women, it was difficult. We spent two nights at sea.

In Italy, we were quarantined for almost 40 days. In the beginning, we were in Lampedusa for nine days. And then they transferred us to Sicily for quarantine. It was one of the most miserable times in my life, I think. Too many people in one place that was not clean, the food was very bad. There were no rooms, only halls, each with about 30 persons. The hall was not that big. It was crowded and we could barely sleep at night because of the noise. Sometimes it was cold. I was on my own. But I met people. I made some, let us say friends maybe but I did not know anyone at first. There were migrants from different countries and different cultures, which sometimes led to verbal or even physical conflicts.

They did not care if we got infected with COVID or not. Because otherwise, they would not have put so many people in one small place without protection and without social distancing. They barely gave us masks and sterilizing stuff. In the beginning, we stayed 20 days and then they made the test. They found 20 cases among about, I think, 350 or 400 people. So, we had to stay extra 20 or 15 days. In total we stayed 36 days in quarantine. It was really difficult.

The security guards did not treat migrants fairly. Some migrants were beaten. Sometimes it was because migrants were fighting with each other, or because they were trying to escape, because it was really miserable, but they were caught. I saw people who were beaten by security, by the police. Despite the security guards in the camp and everything, some people escaped from the camp. One guy tried to escape, and he was hit by a car and killed.

How come you arrived in Hamburg?

Right after they released us from quarantine, I went from Italy to Germany. I went to Hamburg because I had a friend there already. I thought maybe it will be easier for me, because I do not know anyone here in Europe except this friend. And he is already here for about two years. I was extremely fatigued and sick, and I had some injuries. So, the first time in Hamburg for me was physically and emotionally very difficult. I still struggled with the memories of the experiences I had crossing the Mediterranean and the experiences I had made during my stay for almost two months in Italy.

The first day they tested me for COVID, the test came back negative. So, they took me the next day to a camp for a quarantine of two weeks. It was okay. During our first quarantine everybody could stay in a room for themselves, in one small room. And that is the most important for me. And then they transferred me to some other camp in Bargkoppelstieg in Hamburg.

How was the accommodation in Hamburg?

In the first camp I was in a small single room, it was okay. It was quite okay because it was clean. It was not that big, but at least I was on my own. But then in the second one, it was crowded. No privacy. It was more like a hall, not a room, because everything was open. We shared two rooms next to each other, no door between the two rooms, and the wall does not go up to the ceiling, so you can hear people from the next room and the room next to it.

People were from different countries and most of the time we do not speak the same language, so everybody is almost on his own. We all had to share the shower in the bathroom, but at least it was clean. They come and clean every day, which was very different from the situation in Italy. I tried not to show that I am gay, so I did not have any bad experience. I did not have any incident because nobody knows.

How was your experience with security?

The security guards, I have to say they were nice to me, but most of them, they do not know how to deal with this. Maybe they are scared. Maybe they do not have experience. I do not know. For example, when we ask them about something or we need something, they only say, “We do not know.” We almost get no help from security. They only try to keep us inside, and that is it. And even if someone tries to take a walk outside, they control you. For example, if I want to go out, they walk next to me all the time until I get inside again. Or they say, “You have to stay in this area, do not move to other areas.” So, in effect it was closed off completely from the outside.

How was your experience with the social management?

One time, the social managers were storing stuff for me, I was not there in the room, and then they transferred us to another room, and I looked at my wardrobe, but my stuff was not there. And so far, I did not get anything back. And during quarantine, when we asked them about something, they only said, “We do not know. We do not know.” When our quarantine was over and all the tests were negative, they tried to keep us for a longer time. But we made a kind of protest. It was peaceful, only to let them know that quarantine is over. I think it started with like four or five persons, and then we started calling the rest of the people, but not everybody was out. So, they came and released us.

It was after the fifteenth day of quarantine, and two days before they had made the tests, and all the results were negative. So, normally we should have been out of quarantine, but they did not care. Normally, they come from 14:00 to 15:00, but that day they did not show up. They did not show up. We went out and we talked to the security, they called the social management, and they came. And they told us, “You are free to go, but you will be transferred to another camp. So, it is better to stay inside, or at least if you go out, don’t go for a long time.” But I think the protest was successful, it was on Friday, if we had not protested they would have kept us in quarantine at least until Monday. 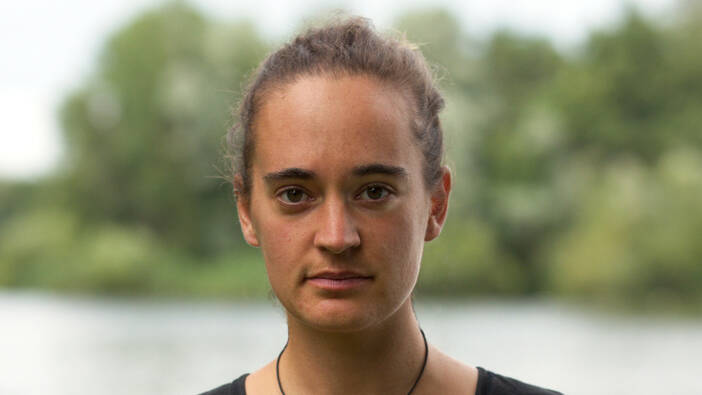 Carola Rackete on the climate emergency, migration, and just forms of environmental conservation