Since last May, when Germany and Namibia signed a Joint Declaration on reconciliation over the genocide of the Ovaherero and Nama peoples carried out by colonial German forces from 1904 to 1908, debates have raged across Namibia about whether the agreement is sufficient. Does it do enough to acknowledge and compensate the descendants of the victims? Does it help to normalize the relationship between the two states? What about ongoing inequalities within Namibia and between Germany and Namibia more generally?

Paul Thomas is a lawyer and a member of the Landless People’s Movement. He works as the Administrative Assistant to their Members of Parliament

The majority of Namibians appear to be unconvinced. Indeed, despite support from the Namibian government, the Declaration has yet to be ratified by the Namibian parliament, and a number of civil society groups in Namibia have openly expressed their opposition to the declaration in its current form. Is the reconciliation process doomed to fail? And what would a just reconciliation look like? To find out, The Rosa Luxemburg Foundation’s Caroline Hüglin spoke with Paul Thomas of the Landless People’s Movement (LPM), one of Namibia’s opposition parties, during his recent visit to Germany.

The Joint Declaration between Namibia and Germany was presented as a success after more than five years of negotiations over the genocide of the Ovaherero and Nama peoples. Since then, however, both the affected communities as well as civil society in both countries have been quite critical. Nor has the Namibian parliament ratified the declaration, although it was envisaged for September. Can you explain why this is, and how you think the debate will continue in Namibia in the near future?

The negotiations over the Joint Declaration were kept secret throughout the process, and only came to light earlier this year. When carefully studying it, one finds that the Declaration seems to have been drafted based on letters exchanged between Special Envoy Ruprecht Polenz and the late Special Envoy Zed Ngavirue. It is hence not something that was negotiated by many parties at one table, but rather these two sides, who represented a limited set of interests.

In terms of content, the genocide is only recognized as such “from today’s perspective”, and Germany pledges continued development cooperation instead of reparations. There are many people who feel that the agreement is not sufficient for true reconciliation between Germany and the peoples of Namibia.

Outside of parliament, various groups representing affected communities have formed to exert pressure. Within parliament, strong opposition has also emerged. So despite the fact that SWAPO, the ruling party, has a majority and could in theory ratify the Joint Declaration, it has now become clear that there will be strong political repercussions for them if they do so. For example, our party is considering the option of litigation in the Namibian courts.

As you mentioned, the negotiations around the Declaration were held largely in secret, violating the principle of “free, prior, and informed consent” upheld by the UN Declaration on the Rights of Indigenous Peoples (UNDRIP). After realizing this, SWAPO organized consultations with communities across Namibia and especially with traditional authorities. Were these consultations able to change way the declaration is perceived?

No. The government failed to honour the principle of free, prior, and informed consent, and did not provide for adequate participation of all affected communities. We from the Landless People’s Movement also spoke to many traditional leaders in different parts of the country. We had a conversation about how the Joint Declaration does not adequately acknowledge the genocide, and that it talks about reconstruction and development aid programmes instead of reparations. Many of the people we talked to agree that the Declaration is not doing restorative justice to those who were dispossessed and expelled 120 years ago, and does not suffice to rectify the effects of German colonialism which are felt to this day.

You mentioned now the work of your party, the Landless People’s Movement (LPM). You have gained quite some influence over the past years, especially in the southern regions in Namibia. Can you tell us a bit more about LPM’s position regarding the Joint Declaration and your work around it?

The question of land and genocide has always been at the centre of our political agenda in the LPM. Our founder, Bernadus Swartbooi, was previously a member of the SWAPO government and deputy minister of land reform. He called out the injustices, which have continued to prevail until this day. For example, 90% of farmland is still in the hands of those who grabbed land from communities that are landless in their own country. After this open criticism of his own governing party, he was expulled from SWAPO, giving birth to the LPM.

Our movement mobilized in different areas and communities, and we were able to solicit support, especially among the Nama and the Ovaherero communities, but also more generally among those who are landless and dispossessed. We have to remember that in addition to the extermination order against the Ovaherero and Nama, German colonialism entailed death, expulsion, and dispossession for other peoples as well, such as the Damara and San. The ramifications of colonialism are still visible today, as many of those communities remain marginalized.

Since we fight for their rights, many members of those communities are supporters of LPM. Thanks to that, we were able to win four seats in the National Council by winning in the two southern Namibian regions, Hardap and ǁKaras. Our presence at all levels—local, regional, and national—plays an important role in terms of being a counter-force against the government when it comes to the Joint Declaration.

Throughout the negotiations, several groups representing descendants of the genocide’s victims demanded and were refused a seat at the table. For this reason, the Ovaherero Traditional Authority and the Nama Traditional Leaders’ Association lodged a complaint against Germany with the United Nations Human Rights Council last month. What do you expect from this process?

As communities who seek justice, we see the international level as another instrument at our disposal to build up pressure. Many people are critical of how effective this can be, but in our view, the United Nations and international bodies of law are additional ways to work towards justice.

Let’s turn to Germany. As you know, we just had elections two months ago and the incoming government has just released its coalition agreement. Regarding Namibia and the genocide, it states that “the reconciliation with Namibia remains a necessary task, which results from our historical and moral responsibility. The reconciliation agreement with Namibia can be the starting point for a shared process of coming to terms with the past.” In light of this, what are your demands and expectations vis-à-vis the new government?

Our expectations are very high. I know that for Germany, this issue does not have a high priority. But we in Namibia want this to be on the top of the agenda. I therefore hope that the new coalition government, if formed successfully, can give attention to the genocide, and that we can find a better way forward.

We demand that the whole deal must start afresh and that a round table be set up where all affected communities can speak for themselves and have an actual say. We hope that Germany gets a foreign minister who pays attention to the significance of this topic, and that we can have a better special envoy from Germany. 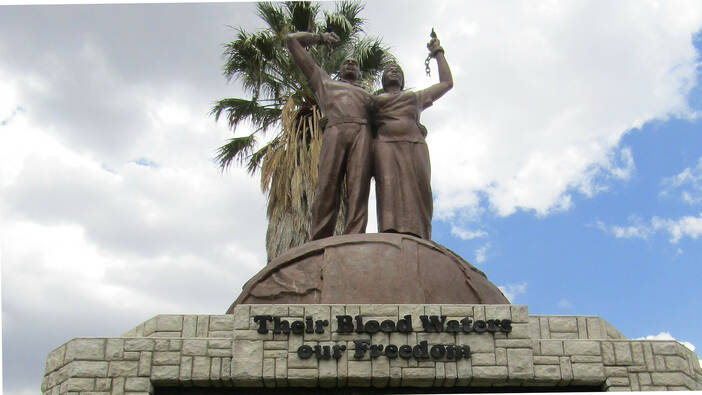 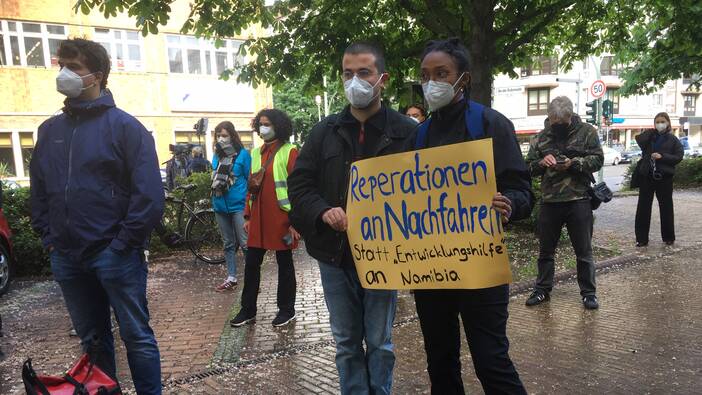 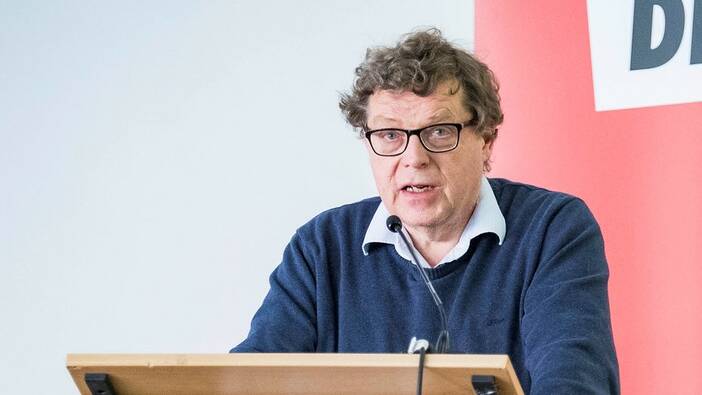 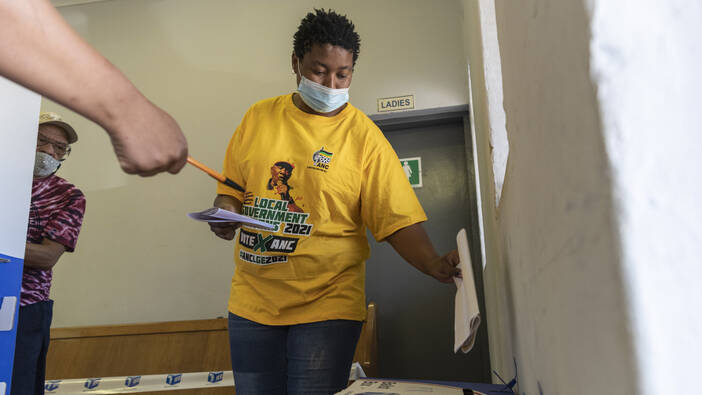 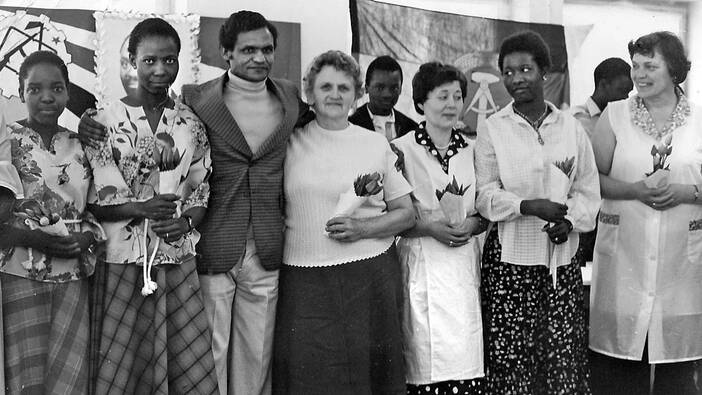