Refugee shelters in Germany took on prison-like characteristics in many places during the COVID-19 pandemic and developed into hotspots of dynamic infection events. For many residents, the pandemic significantly worsened their already stressful living conditions. The protest of the residents, however — despite repeated resistance to the lack of infection protection in various shelters — often received little public attention.

As part of the research project “Endangered Lives. Everyday Life and Protest in Refugee Shelters in the Wake of the Corona Pandemic”, Nikolai Huke conducted 16 interviews with residents in German, English, French, and Farsi. The interviews reveal an appalling picture of living conditions in refugee shelters in many respects. The problems described range from racism, inadequate medical care, noise pollution and lack of privacy, to traumatic experiences due to deportations and violence from security forces. In this interview, Huke spoke with Onur Şahin, who fell ill with COVID-19 in a refugee accommodation. In the interview, he criticizes the authorities’ chaotic handling of the pandemic.

How did you experience the first wave of the pandemic?

When the pandemic started in March, there were the usual measures in our accommodation in Kassel: Keep your distance, cover your nose and mouth, wear a mask. However, there were no cases. Mealtimes were extended and the maximum number of people in the dining room was reduced. But no fever was measured at the gate. I think the health department could have ordered that.

Did the situation change for you in the second wave?

Nothing has changed in micromanagement. They just put up notes on the walls: “keep your distance, wear your mask, cover your nose and mouth.” And wash your hands. That was COVID only measure. They had no structured plans for the different camps. When there was a Corona case in October, they did not tell us anything about it. The BAMF just stopped all transfers and after about three days a quarantine was ordered by the health department. But we did not get any information. It was chaotic. We got breakfast and lunch, but the food was just not edible for me. We had said beforehand that we did not want to eat meat, although we are not actually vegetarians. But the vegetarian food that was served was not edible for us.

All 300 people in the shelter were tested, we could retrieve our results on the internet after 24 hours. I was negative. All the single men who tested negative were moved to Wolfhagen. There were 86 people. Some of the conditions there were very bad. Although the accommodation was clean, three of us were accommodated in a very small room. The wardrobe was so small that we could not unpack our luggage. The food came from Kassel. Nobody explained to us what was happening.

After a week, we were tested a second time. We did not get the results until three or four days later. Then they said to me, “You’re positive.” I was really sick. I only had a temperature of 37.4 degrees, but severe muscle pain. I could not sleep without aspirin and I had no appetite. Twenty-five other people were also positive. We were all to be taken back to Kassel. When we were transferred to Wolfhagen, we went by bus. To transport all 86 people, the bus had to go twice. But when they sent us back, there was only one van.

How did the transfer back go?

We were supposed to go out the door with all our things, leave our rooms so they could clean them, disinfect them and so on. That was at about 16:00. We were then supposed to wait outside until we were transferred. Five people could fit in the van each time. It took over an hour until it was back again. I had to wait outside for a total of five hours.

It started at about 18:00 or 19:00. And we were the last ones, we were driven back at 12:00. And by then we were already sick with COVID and we were still supposed to stand outside. I was very sick, my whole body ached. When you asked why they did not have a bus, you got the answer from the management of the shelter: “We would have liked to have had one, but they didn’t give it to us. We only got the van.” That scared people that they had to stand outside for five or six hours even though they had COVID. People in the health department do their planning at a table in an office and have no sense of the reality on the ground. We then get to feel the problems.

What happened after that?

After two weeks of quarantine, they moved us again, this time to Neustadt. About 20, 30 people who were positive before. In one house of the shelter in Neustadt there were already COVID cases at that time, the residents were in quarantine. So, it was only a matter of time before everyone else had to be quarantined as well. We asked ourselves, “Why are they sending us here? This is where COVID is too.” I had already got my residence permit at that point and was supposed to get a transfer to a home in Darmstadt. Why didn’t they just send me to the home?

The BAMF had apparently said, “All transfers will be stopped.” But at the same time there were transfers from Kassel to the shelter in Neustadt, where there were COVID cases. When we arrived, we asked, “We are healthy, when will we be transferred to our home?” The social worker said, “In ten days, next Thursday.” And then on Wednesday she told me, “All transfers are cancelled.” The shelter was then quarantined. Because we already had COVID, we could move around freely and go to Neustadt in the city centre, for example, or to Marburg. But I couldn’t go to my home — that’s not logical! The location of the accommodation in Neustadt is a problem. It's about 20 minutes to the train station. Supermarkets where we as Muslims can buy meat are only in Marburg. It takes at least two hours to get there and back.

What were the conditions like in the accommodation in Neustadt?

We did not know the management of the accommodation, which was very different from Kassel, where there was good communication. I even went to watch a handball match with the one from Kassel. In Neustadt we did not get any information, we did not even know who the management was. We did not feel treated like human beings. In Kassel you also knew the people in the kitchen. If you asked if you could have an extra loaf of bread, they gave it to you.

In Neustadt it happened once that my friend did not want to get up early. I then wanted to take his breakfast to the room for him. So, I went there with both cards, they read them in. But then they said, “You can only take one breakfast.” She was like, “He has to come here himself.” And I thought, “It is not a weapon, it’s just a loaf of bread. Why are you making it so difficult for us? It’s just a loaf of bread, a cheese and a yoghurt.” In Neustadt, it is true that every floor had a kitchen where you could cook for yourself. But during the quarantine it was closed.

Another problem was the supply of detergent. Normally you get detergent two days a week. Then you go to the laundry room and give the laundry and the detergent to the refugees who work there. They then wash the clothes in the washing machine. But when it was quarantine, all the offices were closed. The washroom was open, but the offices where you get detergent were closed and you had no detergent left. The hygienic conditions were also a problem in Neustadt. In Wolfhagen it was different, you had disinfectant on every floor and soap and paper towels in the toilet. In Neustadt there was no such thing either before or during quarantine, only at the entrance there was a small bottle with disinfectant. We know that cleanliness and disinfectants are important. In all the shelters I have been to, after a few days or weeks, people I’ve talked to said, “The management or the health department wants us all to get sick.”

In Kassel there were rooms for four or six people. But there were only three wardrobes for the six people. That is okay for three people, but when the rooms are full, it’s a problem. However, I did not experience that the rooms were occupied by six people. It is also okay if people are only there for one or two or maybe even six months, then it’s fine. You do not need so many clothes for that time, half a wardrobe is enough. But I was there for 12 months, for example. I needed summer and winter clothes. But at least there were never six of us in the room. The four-bed rooms are also very small for four people. At night, the rooms are very stuffy. In Neustadt, there are three bunk beds in each room. The wardrobe in Neustadt was smaller than in Kassel. In the three months I was there, I never got to unpack my bags.

How were the sanitary facilities in the different accommodations?

Different. In Kassel, the showers were outside in a container. I lived on the fourth floor and had to go outside every time to shower or wash. Then back into the building and up to the fourth floor again. But at least you could adjust the water, how much hot, how much cold and the water pressure was okay.

The accommodation in Wolfhagen is an old military building. The shower had no door and no walls between the showers. That is why you should put a chair in the entrance. Water was only available for ten seconds or maybe half a minute if you pressed a button. The water pressure was not high enough and the shower head was so far up that your feet were cold while you showered. We could not adjust the water temperature. Also, it was always very stressful because there was always a stranger coming, I did not want them to see my body naked. We told the management, “It’s hard for us to shower like this.” They said, “Okay.” But nothing happened. In Neustadt the showers were similar to those in Wolfhagen, but there were small partitions and the water flowed at high pressure.

Did you have any experiences with racism?

Not so many, actually. Once my friends told me that the bus driver at the bus stop near the Kassel camp always drives past when he sees that there are only refugees at the bus stop. He then simply does not stop. People then complained: “The driver doesn’t stop, please take care of it.” But otherwise, I did not experience that so much.

Were you transferred to the home in Darmstadt in the end?

Yes, last week. I asked when my transfer was. They told me, “Tomorrow.” I asked again, in the afternoon. They said, “Tomorrow.” But they did not give me any paper, any information. I was then ready from six in the morning approximately. The staff member who was on the morning shift told me he had no information about a transfer. I said, “There should be a piece of paper in your office because your colleague looked it up on a piece of paper yesterday and said I had my transfer today.” I waited for about an hour, then they said it is on. Now I am in paradise. I have a proper shower, a kitchen, and a washing machine, I have not had that for the last 14 months. 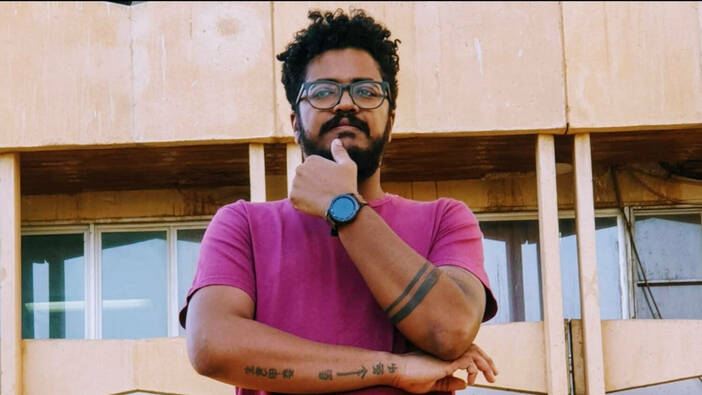