Violence still has large areas of Mali in its grip. Tuaregs in the north of this Sahel country started a rebellion against the central government in 2012. Soon, however, their allies, jihadist groups, seized the upper hand and occupied the north. Although French troops managed to push the jihadists out of the cities in January 2013, they were not able to oust them from the country. On the contrary: since 2015, there have been jihadist attacks further south in the centre of Mali as well.

The humanitarian and security situation in Mali has worsened this year . According to the United Nations, more than a quarter of Mali’s 18 million citizens – 900,000 more than at the start of the year – are now dependent on humanitarian aid. The number of displaced persons has also doubled since January  . According to the International Federation for Human Rights (FIDH), 68 per cent of schools in the Mopti catchment area of central Mali are closed. Forty per cent of attacks by jihadist groups are concentrated in this region. In the past two years, 1,200 civilians have died here as a result of the violence, and around 50 villages have been set on fire. The population not only suffers violence at the hands of the jihadists, but is also attacked by militias belonging to various ethnic groups and by gangs of criminals.

There is no obvious way out of the civil war. The 2015 Algiers peace deal brought hardly any progress. In a recent study supported by Rosa-Luxemburg-Stiftung Dakar and entitled ‘Mali’s tragic but persistent status quo’, US academic Alex Thurston takes a close look at the various protagonists in the conflict and their motives. He points out important differences between the conflicts in the north and centre of Mali.

In the northern region of Kidal in the Sahara – the centre of the Tuareg rebellion, where the most recent uprising began – the protagonists are not newcomers. Most of them played a part in the last rebellion in 2006. There have been a number of Tuareg uprisings since Mali gained independence and they have destroyed relations with the central government in Bamako, in the south of Mali.

The Tuareg elite wants greater autonomy and, in some cases, independence. It claims that the north has been neglected by the government in Bamako. However, the issue is not restricted to relations between the Tuaregs and the central government – there is also conflict within the Tuareg community.
Over the course of history, the Ifoghas tribe gained political power in the north, but their power has been decimated by the various Tuareg rebellions and the severe droughts that plagued the country from the 1970s onwards. Their political authority is challenged by the Tuaregs who sought refuge from drought and poverty in Algeria and Libya. While there, they learned to fight and incited the rebellions of 1990 and 2006. Others within the Ifoghas tribe advocate an independent north that would be multi-ethnic and open to other tribes and castes. Another group represents the younger generation of political leaders who are eager for a share of power, and who accuse the old leaders of negotiating with the central government. Other rival groups, like the Imghad, a group lower down the Tuareg social hierarchy, question the political dominance of the Ifoghas tribe. As well as wanting greater autonomy, they are calling for a shakeup of Tuareg society and greater equality.

Today, the various Tuareg groups are divided into two opposing organisations: the Coordination des mouvements de l’Azawad (CMA), which is striving for autonomy, and the Plateforme, which is more supportive of the central government. Both organisations signed the Algiers Accord but no group is powerful enough to defeat the others. The boundaries between the two camps are fluid. The government manoeuvres the country between the various groups, which use the government to further their own aims. The government is, with difficulty, regaining a foothold in the cities. In 2018, the Prime Minister was able to travel to Kidal once more. As recently as 2014, a visit by the Minister of the Interior triggered a deadly riot. Outside of the cities, the country is still in the hands of the rebels.

A new aspect of the 2012 rebellion was that it opened the door to jihadist groups. This changed the views and responses of international players. In Mali, the global War on Terror let people forget the tensions within the community. The jihadists acting in northern Mali are by no means outsiders. Their leader, Iyad Ag Ghali, is a Malian Tuareg and a member of the Ifoghas tribe. He took part in the 1990 and 2006 revolts. Now, because they have been excluded from the political game by France and the USA, jihadists like Ag Ghali cause trouble whenever any attempt is made to establish peace.

The situation in the centre of the country is very different, especially in the region around Mopti, which Thurston also studied. In contrast with the north, the unrest here comes from below. The violence flares up between local communities and at district level, and the protagonists are jihadists, Malian troops, ethnic militias and bandits.
Structural changes play a role here too: as in the north, severe droughts and rapid population growth have aggravated the conflicts over access to land and water. Agricultural developments, such as irrigation, have also altered the balance between land users – crop farmers and herders. Thanks to irrigation, farmers are able to cultivate their fields for longer. And with their rising incomes, they have bought their own livestock. As a result, arrangements with herders have broken down in many places and farmers are refusing them access to the land.

The historically established authorities that supervise land use – for instance, by setting the price of grazing land – are now seen as corrupt and, in some cases, illegitimate. In many cases, it is not possible to refer disputes to the courts because the law officials are also notoriously corrupt. The people – particularly the women who collect firewood – also resent the government forestry authority, which imposes heavy fines. The aim, according to geographer Tor Benjaminson, is to impress foreign donors in the fight against climate change.

Put simply, there is often complicity between traditional and government officials. In this situation, the people feel powerless. Frustration is widespread, especially among herders, most of whom are Fulani and are increasingly being branded as jihadist sympathisers.

The jihadists know how to manipulate local resentment and they are not outsiders in central Mali either. Their most prominent leader is a Fulani, Amadou Koufa . He is reported to have been killed on 23 November by French forces operating in the region. For years, he had been a radical itinerant Islamic preacher who denounced the corrupt local elite in the region. After the 2012 rebellion, he gradually moved closer to the jihadists led by Ag Ghali.

Koufa and his followers use violence against village communities with the aim of imposing sharia law and closing government-run schools. Wherever they are in power, they introduce a new system of administration for grazing land. Koufa’s followers, most of whom are young, are motivated by a number of different factors: some are searching for ways to make money or for protection; some support the religious message and the new law and order introduced by the jihadists.
In central Mali, villages have set up self-defence groups to try to protect themselves against attacks by the jihadists. Increasingly, they are also carrying out punitive strikes on Fulani villages, which they accuse of being allies of the jihadists. As a result, the Fulani have also formed militias to protect their own villages.

The violence is devouring people’s livelihoods and forcing thousands to flee. Most of the victims are Fulani, according to a report by Human Rights Watch (HRW). In the report, women describe how they are prevented by the militias from going to market, and men report that they can no longer cultivate their fields. Livestock theft has also increased. Mistrust is growing in the villages and the government does nothing. Only one case in 2016 led to a serious inquiry and a conviction. Thurston believes the population is left without a voice. It has nothing to gain from the intrigues among the elites in the north and the armed groups. It is unclear to what extent the people share goals like independence, autonomy or jihadism because they do not form mass movements.

The presidential elections did not give the people a voice. And local elections are regularly postponed because of the security situation. Fatalism and apathy hold sway even among the voters themselves. Mali’s politicians have been in office almost since the introduction of democracy in the early 1990s. The line between those in power and those in opposition is permeable – the main thing is to stay in the game, to carry on playing for power, influence and money.
So, do local peace initiatives – like the agreement signed on 28 August 2018 in Koro Cercle – help? Fulani and Dogon communities in this region had been fighting for a year. The negotiations were initiated by the Swiss Centre for Humanitarian Dialogue (HD). Among other things, the communities pledged to call on government troops where necessary and to make use of traditional arrangements for resolving conflicts over resources. The peace did not last long.

Malian academic Ba Konaré says: “A mediation organisation cannot replace a government strategy.” Local peace initiatives are, she  says, popular: they make foreign donors look good because it shows they are involved in the search for peace in Mali. For its part, the government gives the appearance of doing something – because government representatives are paid to take part – and the local groups show goodwill while building their power base thanks to international recognition and per diem allowances. Ba Konaré believes the government cannot simply delegate the search for peace.

There is a paradox in Mali: the population harbours serious resentment against the government and yet four-fifths of the population sees the government as the legitimate, primary provider of security and justice, according to a survey by the Stockholm International Peace Research Institute (SIPRI).
Thurston therefore wants the population to be involved in the search for peace in the Mopti region. He proposes that citizens should have a direct say in local politics and in the management of resources. The central government should dispense with military governors and judges who are not accountable to anyone. Another controversial suggestion is his proposal for a temporary, transitional autonomy for the Kidal region in the north – dynamite for the government in Bamako.

Translation and Proofreading: Ros Mendy and Nivene Rafaat for lingua•trans•fair 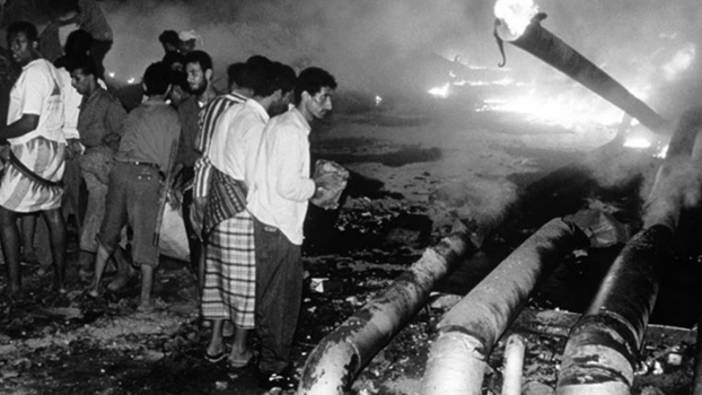 Dr. Saeed al-Gariri discusses the events of 1989–90 from a South Yemeni perspective