Everything could be going pretty well for the Qatari ruling family: the small, rich emirate on the Gulf enjoys a great reputation on the international stage in addition to a high quality of life, top-class education, and world-class sporting events which never cease to impress. All of this is true—up to a point. The reality is quite different for the migrant workers who make up 85 percent of the Qatari population. Unlike for Qatari citizens, for migrant workers money is often an issue, the excellent public health care is not free of charge, and, above all, they keep the country running with their work in the service and construction industries. However, they often have to wait a long time for their payment—if it comes at all.

Christopher Resch works as a freelance journalist, primarily on topics relating to West Asia and North Africa, and edited the volume Medienfreiheit in Ägypten (2015). He previously worked at the Goethe Institute in Egypt and Saudi Arabia.

6,500: this figure has been circulating in the international press since 23 February. According to the Guardian, this is the number of migrant workers who have died in Qatar since 2010, which is when the country was awarded the contract to host the 2022 World Cup. Even if the figure is disputed and the proportion of these deaths being due to accidents at work on the World Cup construction sites is unclear, the general public is increasingly putting pressure on the football teams of the participating countries, and above all on Qatar.

The emirate is at pains to dispel the figure, saying it is not clear whether people died on World Cup construction sites. They argue that the death toll was perfectly normal. They claim it is an insult that the efforts to abolish the kafala system, in which the fate of an individual worker is linked to a Qatari sponsor, are not being sufficiently appreciated.

Experts from Amnesty International, Human Rights Watch, Transparency International and international trade unions paint a more sophisticated picture. There has been a lot of criticism, but they have also seen improvements in fundamental working conditions in recent years. Are these improvements, however, really being implemented? Initial reports have recently claimed that some of the announced improvements are already set to be reversed. In reality, it is often still the case that the 2.3 million migrant workers wait months for their wages, work up to 18 hours a day, and until recently were not allowed to change jobs of their own free will. Even the recently announced increase in minimum wage to 1,300 Qatari riyals (ca. 304 euro at the beginning of April) is a step in the right direction—or is it only a facade.

The Qatari rulers are well versed in the art of exploiting public opinion for their own ends. To do this, they enlist the help of an army of mostly English-speaking PR firms, which for a long time did a good job: through an intensive act of “sportswashing”, much of the information circulating about Qatar on the Internet was and is positive. In handball, the Qatari team, which consists mainly of international stars, has celebrated great successes. Bayern Munich regularly travels to the capital Doha for training camps, and they as well as FC Barcelona advertise for Qatar Airways. It must not be forgotten that the football star Neymar moved to Paris for an insane sum totalling 600 million euro—paid for by Qatar.

Natural gas is the largest source of revenue for the country. Qatar exploits the South Pars gas field, by far the largest natural gas field in the world. Iran also has a share in it, but the North field, which is entirely on Qatari territory, accounts for about 20 percent of the world’s known natural gas reserves alone. Qatargas, a quasi-state-owned company founded for this purpose in 1984, is now the world’s largest producer of liquefied natural gas. Depending on the criteria, Qatar can often make the claim to be one of the wealthiest countries in the world—but the small state is also extremely wasteful of its resources.

Qatar’s finances flow not only into expensive marketing campaigns, but also increasingly into the import of weapons. French and German manufacturers in particular sell to Doha—in 2020, Doha paid 305 million euro for military equipment from Germany. Weapons and money secure influence, for example in Libya, where Qatar, alongside Turkey, has been supportive of the internationally recognized government of Prime Minister Fajis al-Saraj in Tripoli. However, the emirate exerts even greater influence through another lever, albeit one which is more difficult to measure: the media.

In 1996, the then Emir of Qatar, Sheikh Hamad bin Chalifa Al Thani, who was in office until 2003, founded the Al Jazeera television station. The station quickly became an important voice throughout the West Asia and North Africa region. After the terrorist attacks of 11 September 2001 and the subsequent US war against the Taliban in Afghanistan, if not already earlier, Al Jazeera also became known internationally—and for many years enjoyed the reputation of being a relatively independent news source. Al Jazeera’s claim was that it wanted to give a voice to those who had been marginalized in the Arab world. At the onset of the Arab Spring in 2011, the station first sided with the insurgents and subsequently allegedly gravitated more toward the Muslim Brotherhood.

The accusations levelled at the Qatari rulers are that among other terrorist groups, Doha supported the Muslim Brotherhood, who are seen by Saudi Arabia and Egypt, two important regional players, as one of their main internal opponents. Largely because of this, an alliance between Egypt, Saudi Arabia, the United Arab Emirates (UAE), and Bahrain broke off diplomatic relations with Qatar in mid-2017 in an attempt to isolate and block the country internationally. The immediate closure of Al Jazeera was one of the 13 demands the alliance made of Qatar on 22 June 2017. Qatar was able to endure the embargo, primarily because of its wealth. Although it had to reroute some international supply chains, no other concessions were made. The conflict was officially settled at the beginning of January 2021 with mediation by Kuwait.

Everything would be good again in the emirate—if it weren’t for the unspeakable public opinion in the run-up to the World Cup. At the moment, the prevailing opinion is that the country is doing more than enough and is in an excellent position, especially in comparison with its neighbouring countries Saudi Arabia and the UAE. There is some truth to this, as well as to the accusation that the Western world was far less harsh in its criticism of the 2018 World Cup in Russia. However, the domestic workers in Doha and the workers on the large construction sites have absolutely nothing to gain from this. For them, things still have to change in Qatar—the rich country in the Gulf. 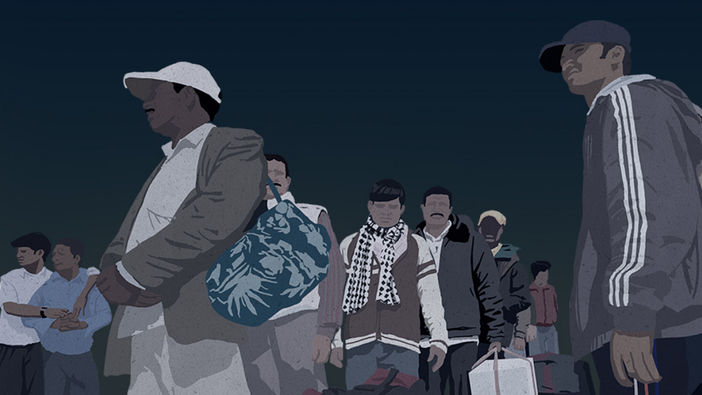