Famara Diédhiou of the Alliance for Food Sovereignty in Africa (AFSA) has over 15 years of experiences working mostly in rural development in African countries, particularly in the establishment of community seed banks and advocacy for sustainable agriculture and to advance the food sovereignty struggle and to push for African driven solutions.

AFSA is a broad alliance of different civil society actors that are part of the struggle for food sovereignty and agroecology in Africa. It is a network of networks and currently with 35 members active in 50 African countries. In the run-up to the release of The Last Seed, he spoke with Jan Urhahn of the Rosa Luxemburg Foundation’s Food Sovereignty Programme about the importance of seeds for farmers, the ongoing seed struggle in Africa, alternatives to the dominant system, and what he hopes the documentary can achieve.

What does seed represent for you? What makes it intrinsically valuable?

The practice of agriculture requires a set of elements: land, seeds, knowledge, labour, water, etc. Of all these elements, the seed is the only life-giving and irreplaceable element. Seeds mediate our connection as humans with the earth and all of nature. Through seed, we are able to honour the land, continue the legacy of our ancestors, and pass on knowledge to future generations.

In Africa, cultivated biodiversity is often used for cultural and ritualistic expressions that are part of the continent’s natural richness. Our food comes from seeds, and it’s the farmers and broader community that selects and saves the seed from which culturally relevant and acceptable food that is enjoyed locally.

Despite globalization, it remains that people, whether by continent, region, country, or ethnic community are distinguished by their food, their food culture. For example, the differences in sorghum are very visible: the colour of the seed, the size and the shape of the seed. Preferences for this crop differ from one community to another, as do the ways in which they are used.

Each dish speaks to the dietary, culinary, and cultural needs and preferences of the community that it comes from and each community preserves a particular variety according to its uses. Thus, the prosperity of a seed denotes the richness and expression of a people’s culture, knowledge system and heritage, all of which are fundamental human rights.

Why should we be concerned about seed and who controls them?

Currently, under the pretext of fighting world hunger, the narrative of improved corporate seed varieties seems to dominate policy debates and development discourse, including political authorities, farmers’ organizations, and some farmers. This narrative is being embraced.

In reality, these are depreciated seeds, especially as they often prioritize yields at the expense of other important qualities of seeds and the needs of farmers and the communities they feed such as taste, nutritional value, and resilience in the face of the specific local conditions. This is one of the reasons why, after several years of promoting improved seeds, promoters have realized that there is a nutritional deficiency among users and now want to fill that gap through biofortification.

They are leading us into a vicious cycle. After all, the promoters of improved seed varieties are selling us the poison and its antidote for the sole purpose of making money from farmers, citizens, and states. That is why each of us must be concerned about the nature and origin of our food and therefore of our seeds. Improved seed varieties are promoted by multinational agrochemical companies.

Why are international seed companies interested in taking over the African seed markets?

Africa presents itself as a continent with high agricultural and consumption potential. Of the 7.2 billion people who currently inhabit the earth, 1.3 billion are on the African continent, which has the youngest population and the highest birth rates. In a continent where almost 50 percent of the population depends on agriculture, 30-50 percent of GDP is made up of agriculture. The agricultural sector is therefore a niche investment for multinational seed companies.

What are corporate seeds?

Most corporate seeds are hybrids that can only express their potential for three to four years on the farm. After that time, they become disastrous.

The seeds of the seed industry need to be doused with chemicals that end up in our food bowl, in our stomachs in order to perform well. For about two decades, multinational agrochemical companies have been influencing seed policies and regulations by promoting so-called “high-yielding improved seed varieties”, while criminalizing the seeds that farmers have used from father to son, mother to daughter, and for centuries.

What are farmers’ seeds?

Farmers’ seeds are the plants of tomorrow, as one geneticist put it so well. They are the seeds of sovereignty, of freedom for healthy and nutritious food. They can be used for several generations and will keep good germination rates and yields, as long as soil fertility is well-managed.

Farmers’ seeds are those that have withstood all the climatic changes and social shocks that the African continent has gone through: they are resilient seeds in the true sense of the word, seeds of life and survival, not business seeds.

Why are farmer-led seed systems the solution?

The real place for seed storage is the soil. Each planting season, in the natural environment, the plant stores information about the environment (soil, temperature, disease, humidity, etc.). The seeds from this previous planting are ready to face the hazards of nature the following season, and will again record the new data of their environment. In this way, the farmer always collects the best seeds that he or she will use as seed next season.

These seeds contain everything needed to perform well in such environmental conditions. This is how farmer-led seed systems work. These systems are also better able to cope with climate crises we are all facing.

What do you hope the documentary The Last Seed will achieve?

NGOs, civil society organizations, and farmers’ organizations have long decried the intention of multinationals to control the farmers’ seed system. Authorities, policy makers, academics, media, and some populations have been sensitized, and some have rallied to the cause. With The Last Seed, we hope that just as Everything Fastens raised global awareness about food, the world will question the origin of our food and the real intentions of multinational seed companies.

More information about The Last Seed can be found here. 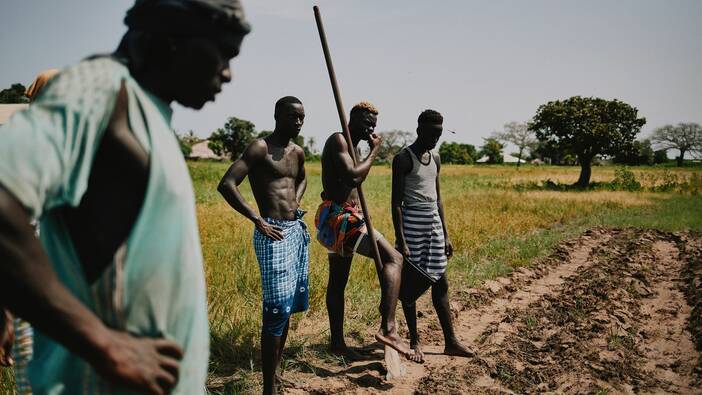