Late last year, a decision was taken to save the world. This decision was the reward for twenty years' worth of work towards a global climate agreement. The aim of the agreement - keeping the global average temperature rise "well below two degrees Celsius" - signified a highly ambitious attempt to uphold global climate protection policy. This, at least, is the view of the majority of the people who, since the 1992 Earth Summit in Rio, are said to constitute "global civil society". These large and small environmental and development organisations are generally optimistic about the UN climate process and they continue to monitor it closely. In fact, they believe that the Paris Agreement marked the pinnacle of global environmental protection. Nevertheless, they also realise that it is time to draw up the specifics of the Paris Agreement and that the contributions which have been determined at national level and which have been put forward until now, need to be significantly strengthened.

COP22 will particularly focus on the issues of "climate change-induced loss and damage" and "climate financing". Both of these issues encompass the central aspect of the international climate regime: the question of how the costs and burdens incurred by mitigation and adaptation and loss and damage should be distributed. This also requires accepting the polluter pays principle, in other words, the point that the Global North will have to pay significant sums of money to the Global South. However, this is not merely about fairness; rather, this issue is of strategic importance because the countries in the South base their commitments to climate protection precisely on this flow of funds. If we accept the arguments of the Global South, we (also) need to set our sights on the UN climate summit because protests at the national level will not be able to solve the problem of global redistribution. Even the climate activists who are the most critical of the major institutions accept this point.

Nevertheless, these activists are not particularly focused on the summit's agenda. Why? Because Marrakech has attracted very little public attention. This situation reflects a pattern that has regularly occurred throughout previous decades: a "large" COP takes place every few years in the Global North (such as in Kyoto, Copenhagen and Paris) followed by a number of intermediate COP2s, mostly in the South, that basically go unnoticed by the public. Accordingly, the activists are mostly interested in the publicity-making function of climate summits, not their policy-making function (on the relevance of the different views about the Paris Summit, see here). They believe that what is said about the summit is often more important than what is stated at the summit.

Why are the activists so sceptical of climate summits? Many of these activists stem from a political tradition, which, unlike the NGOs that are more optimistic about the summits, developed out of opposition to the institutions of global governance that were established during the heyday of neoliberalism. In the activists' view, the measures that these institutions put in place when they fight climate change are at best ineffective, at worst, their green capitalist policies exacerbate climate change and other environmental and social problems. This view is clearly reflected in the activists' slogan "Never trust a COP". This leads the activists to argue that negotiations over climate issues need to be conducted directly at the coalfields and other sites of fossil-capitalist commodity production. In the view of activists from the Break Free Fossil Fuels campaign or Ende Gelände, therefore, the summit is nothing but a sideshow.

Although the Paris Agreement has been finalised, there is still very little reason to believe that international climate policy is on the home straight and moving us out of the climate crisis into a climate-friendly world. So what exactly is on the agenda at the UN Climate Summit in Marrakech?

Nevertheless, both sections of civil society - the NGOs that are more optimistic about the summit and its critics within the climate justice movement - view summits as taking place at the global level. Hence, they both tend to neglect the point that international summits always have regional relevance. Yet this could turn out to represent a really exciting aspect of COP22. What if Moroccan civil society were able to turn this COP into an African COP, and, with it, to promote and deepen the discourse and practice of climate justice and anti-extractivism?

Unfortunately, there are three reasons why the prospects for this are bleak: first, 'climate justice' (both as a discourse and a movement of praxis) is in its infancy in North Africa; the social movements in the region, which are certainly present, are mostly focused on other topics. Second, civil society in Morocco does not have much scope to tread on the toes of the royal family and its surrounding power structure (the Makhzen). Finally, in cooperation with the European Union, the Makhzen supports an energy policy focused on the construction of mega-projects such as the solar power plant in Ouarzazate in order to generate a clean image.

Nonetheless, the activists in Morocco need support and we should welcome the fact that the world's attention may at least partly focus on the summit. If this were to happen, it would broaden the activists' opportunities and could help them lay the foundations for a climate justice movement in the region. On that account, we will be accompanying the activists in Morocco, and reporting about the developments here. 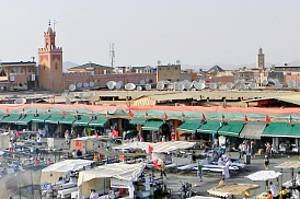