Climate change: a matter of injustice

A climate justice politics in this context is one that aims to do two things:

One, design policies that allow us to avoid the dreadful reality of runaway climate chaos and an increase in climate injustice;

and two, design policies that do not shift the burden of climate adjustment, of a 'socio-ecological transformation', onto social groups and milieus that have already borne the brunt of existing climate injustice. These can range from 'frontline communities', who have suffered not only from the immediate effects of fossil fuel extraction and other activities that drive climate change – respiratory diseases, violent eviction, and even death – but that also suffer more from the effects of climate change than wealthier communities often do; all the way to workers in fossil fuels and other dirty industries, whose rights and demands for an economically secure life and good, meaningful jobs must be taken into account.

A Just Transition is first and foremost: a rapid and radical transition

In order to avoid the threat of runaway climate chaos and the massive escalation of global injustices that this would entail, to say nothing of the impoverishment and death of millions and millions of mostly poorer people, the parties to the UNFCCC have committed themselves to attempting to keep global warming below 1.5 degrees, a goal that was reaffirmed and turned into practical suggestions by the recent IPCC-report. To be sure, a transition that 'merely' keeps global warming to 2 degrees Celsius would confine large parts of subsaharan Africa to drought and devastation, and the largest part of the small island states to being submerged by the rising oceans, thus constituting at best criminal neglect, and at worst massive premeditated mass murder. However, even a 1.5-degrees-warming-world is one that already entails catastrophic impacts: for coastlines, arctic ecosystems, small-scale fisheries, coral reefs (who will suffer a 70-90% loss at 1.5 degrees), and of course those frequently marginalised people who depend on them. And finally, this summer we saw, even in privileged Europe, that the world is already too hot at 1 degrees warming, and that weather patterns – e.g. in Central America – are already destabilising.
This means that the first, second and third target of any climate transition that deserves to be called 'just' has to be keep temperature increases as low as possible, as it is temperature-increases, not job-losses, that are the primary driver of climate injustice.1 Every tenth of a degree warming makes other fights for justice ever so much harder, which is why we have to fight tooth and nail to prevent them. A Just Transition, therefore, has to be rapid and radical.

A just transition for communities and workers

Having made it clear that there cannot be a just transition that is not rapid and radical, and having begun to develop paths towards such a transition, it is now crucial that we there exist societal coalitions that are actually capable of pushing for the necessary reforms, nay, minor revolutions – it is precisely to enable us to think such coalition, that the concept of a 'just transition' was developed from within the trade union and environmental justice movements, in order to blunt the force of a potential opposition between frontline communities' and industrial and other workers' demands and interests in such a process: “Just Transition strategies were first forged by labor unions and environmental justice groups, rooted in low-income communities of color, who saw the need to phase out the industries that were harming workers, community health and the planet; and at the same time provide just pathways for workers to transition to other jobs.”2 This means that a just transition can only come from the multiple affected communities themselves: “Just Transition is a ... unifying … set of principles, processes, and practices that build economic and political power to shift from an extractive economy to a regenerative economy... The transition itself must be just and equitable... If the process of transition is not just, the outcome will never be.”3

A just transition does not mean: “Dirty Industries and polluting jobs first!”

The Rosa-Luxemburg-Stiftung fully supports our EJ and trade union-allies' attempts to create pathways towards a just transition, and congratulates the ITUC and its allies on managing to insert the call for a JT into the preamble of the Paris Agreement. However, coming up to the COP24 in Katowice, deep in coal country, we note with skepticism that there is a tendency in Northern and/or industrialised countries – ironically being led in part by former supposed climate champion Germany – to reduce the idea of a just transition to a story that makes rapid and radical climate action dependent on maintaining industrial jobs in polluting Northern industries. In this context, the current Polish government, not traditionally an actor associated with full-throated defences of workers' rights and climate justice, is investing a large amount of political capital into debates about 'Just Transition', and is indeed pushing its very own “Solidarity and Just Transition Silesia Declaration”.

While we applaud the fact that JT has become a central frame within which to discuss the relationship between ambitious climate action and industrial jobs especially in the global North, we are concerned that the approach currently taken by many actors within the UNFCCC constitutes an unnecessary and indeed dangerous shoehorning of what was once a broad-based approach to bringing together frontline communities and industrial workers in a conversation about how to change the word together, into a rather narrow discussion that might be headlined “Dirty Industries and polluting jobs first!”. We are also worried that the debate on JT nowadays rather serves the interests of (big) polluting and fossil industries, backed-up by governmental resources, instead of the workers’ and public’s interest.

It is our firm conviction that temperature increases are the key driver of climate injustice, as a result of a which no transition can be called 'just' that does not first and foremost aim to keep them to a minimum.

Once we are clear on this non-negotiable goal, we can and must have a conversation about how to address the legitimate demands of workers in polluting industries and sectors for economic safety, as well as good and meaningful jobs. We believe that it is insufficient to point towards other jobs opening up in other areas and sectors, as we are no green neoliberals: those societies who have been powered for decades, even centuries by the work of those in the pits and mines and production lines of industrial capitalism have an obligation towards those workers, to make sure that the transition is as just as possible.

A just transition, then, is one that is both rapid and radical, keeps temperature increases to a minimum, and which does not trample the rights of workers and communities to shape the process themselves.

1) In this sense, the first of the two goals of a CJ-politics outlined above – maintaining a stable climate in which large parts of the world are not condemned to becoming sacrifice-zones - must be seen as politically (and indeed logically) prior to the second one, the just distribution of burdens in and during the transition.

While in the Hambach forest police is clearing treehouses , the coal exit commission is meeting in…

On 5 December 2016, transform! europe, the Brussels office of the Rosa Luxemburg Foundation and MEP… 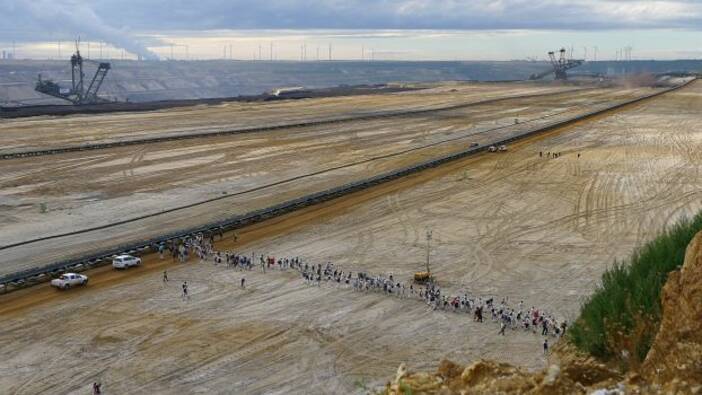