The Cambodian economy has been hit very hard since the start of the coronavirus pandemic. A lot of people are losing their jobs, especially in the garment, textile, and travel goods industry, as well as in tourism. These sectors are considered the backbone of Cambodia’s economy. Cambodia is a country with a total population of 16 million people, of which 40 percent work in agriculture. The garment sector accounts for around 850,000 workers and ensures the livelihoods of many more.

Yon Sineat is a journalist based in Phnom Penh, Cambodia.

Seak Hong, 36, works at Horizon Outdoor Factory in Cambodia’s Kampong Chnnang province. She works six days per week. “Since the fourth week of March the factory doesn’t have overtime for workers anymore, including me, so now we all finish the work at 16:00 and leave the factory”, she says.

Due to the lack of overtime work, her income has decreased significantly, causing her to fall on hard times. “I get 200 dollars per month, and that’s just enough to cover my bills and to pay back the loan that I used to renovate my house. But if this continues longer than just a few months, I will face shortages. Then it will be difficult for my family to cover other expenses and to buy food, as everyone in my family depends on my income.”

She describes that the situation in the factory is not very different from before the COVID-19 outbreak. Workers still travel in open trucks. Sometimes there are up to 100 people in the truck, so crowded that workers are cramped and social distancing becomes impossible. Keeping distance is also challenging when entering or leaving the factory, where workers get in long lines to give their thumbprint.

“During the first week after the first infections in Cambodia, the factory tried to measure the temperature of the workers before they reached their work stations, but that didn’t work properly, as there are about 8,000 workers here”, Hong says. “So then they changed the plan by letting workers first go to their work stations and measuring the temperatures when everyone was at their place and working.”

Things are more or less similar at the Dilink factory on the outskirts of Phnom Penh. Here, workers whose contracts expire will not see them renewed. The exclusive awarding of short-term contracts for three to six months is a sad reality in these factories, repeatedly criticized by trade unionists.

Khann Sophea, 31, has worked in the garment industry for 12 years. She’s the mother of two daughters who stay in the countryside with her parents. Her factory produces clothing for Adidas. She does not agree with the government, who says the factories are a safe place for workers during the coronavirus pandemic: “When we enter the factory, all workers walk in line next to each other. We travel together and sit together during the lunch break. There is no social distance, so if one worker gets the virus then he or she can easily infect others.”

During the Khmer New Year, which lasted from 13–16 April and normally is Cambodia’s biggest national holiday of the year, Sophea decided to stay in Phnom Penh and work instead of going to meet her family in the province. “I went to work during that time because the government had put travel restrictions in place. They said that if I do not go to work I will not receive my attendant bonus and I would have to stay in quarantine for 14 days when I came back. I would not get my salary during these 14 days. So I forced myself to stay and to go to work, even though I miss my daughters. Because I also need the money to be able to support them, especially now that everything is getting more expensive.”

Cambodian Prime Minister Hun Sen announced on 7 April that the Khmer New Year holiday had been cancelled for this year and that Cambodians would receive their five-day leave as soon as the pandemic was over. Hun Sen also addressed the difficulties for the garment and textile industry. After the factories first struggled with a lack of raw materials from China, they now struggle with clothing brands cancelling their orders and not paying for what they ordered.

With these problems in mind, the government decided that workers who have their work suspended will receive 70 dollars per month, with 40 coming from the government and 30 from the employer. An earlier decision said that workers would receive 60 percent of the minimum wage, but now that has gone down to less than 40 percent. The prime minister said that this was the only option, as employers cannot afford to pay more now that many already produced items cannot be exported.

These problems occur because several brands have cancelled their orders in Cambodia, due to the closure of many stores in the West. Several big fashion brands—such as H&M, Adidas, M&S, and VF—said that they are committed to paying for what they ordered, but it is uncertain if and how many new orders will be placed.

Others are acting more drastically, such as one of Cambodia’s major buyers, C&A. In a letter seen by this reporter, the Dutch-Belgian-German fashion retailer says that “all orders—no matter their current status/development—with a last delivery date in March, April, May or June 2020 are herewith, i.e. with immediate effect, cancelled.”

Ken Loo, Secretary General of the Garment Manufacture Association of Cambodia (GMAC), told the reporter that Cambodia’s garment industry is in fear of future orders being drastically reduced. Even now, the factories have difficulties to receive the payments for already supplied orders as in the purchase order agreements with the brands. The future of the factories depends heavily on the global situation and measures taken to cope with the coronavirus pandemic.

Furthermore, Ath Thorn, president of Cambodian Labour Confederation, believes that employers are using the pandemic as an excuse to easily get rid of their workers. “Because there are factories that have the ability to afford the wage of a worker. But they are using this occasion”, he said. 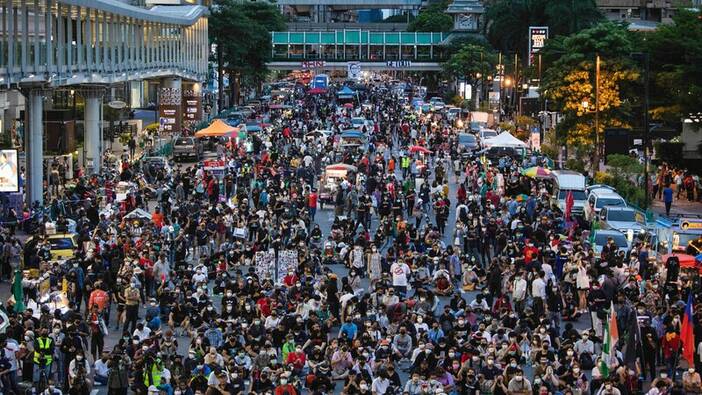 Despite its explosive growth early on, the democracy movement is struggling to reach ordinary…