The term “Green Deal” has been on everyone’s lips in the European Union institutions in Brussels for over a year now. At a time when movements warning about global warming, with strong support from young people across Europe, have amplified calls for climate action and systemic change, the Green Deal stands out as a key milestone in European history. European Commission President Ursula von der Leyen described it as a “‘man on the moon’moment” when presenting it to members of the European Parliament. Yet, as so often, the vast majority of European citizens are only vaguely aware, if at all, of the concept.

This article first appeared in Silomag.

With the social and economic impacts of the COVID-19 pandemic still hard to estimate, it is fair to ask whether the Green Deal will be able to meet the three biggest challenges of the twenty-first century: climate change, rising inequality, and democratic renewal. A closer look at the Green Deal suggests that, while based on laudable climate objectives, it simply keeps the existing financialised tools and arrangements in place without putting forward a real reconstruction of European production systems.

In December 2019, the European Commission, the executive body of the EU, unveiled its new hobby-horse for the next five years: the European Green Deal. The plan represented quite a departure for the Commission, with its customary penchant for drab titles often bearing a person’s name. Yet the “Green Deal” label was significant here in that it brought the EU’s plan into the same orbit as various other “Green New Deal” proposals, many of them sponsored by progressive or left-wing forces.

The term alludes primarily to the New Deal, the major investment drive launched by US president Franklin D. Roosevelt in the wake of the 1929 economic crisis on the basis of Keynesian spending principles and mass public-sector employment. That said, the Commission’s decision to omit part of the name also suggests an attempt to avoid the initiative being viewed as a direct descendant of that plan.

Indeed, this green package, while envisaging a refocusing of EU investments, cannot be regarded as a development plan on the scale of the 1930s New Deal. Moreover, and unlike Roosevelt’s approach, it is not designed to promote the public sector. This stands in contrast to the Green New Deal (incidentally, a term that the Commission assiduously avoids), whose proponents advocate for more direct parallels between between their initiative and Roosevelt’s New Deal.

The Green New Deal also hails from the United States, where it has been pushed by grassroots environmentalist organizations. The political and social project was taken forward in particular by Bernie Sanders, the independent senator who ran for the Democratic presidential nomination, and is now being spearheaded by Alexandria Ocasio-Cortez, a Democratic member of the House of Representatives. In the UK, a similar programme, the “Green Industrial Revolution”, was put forward by the Labour Party under the leadership of Jeremy Corbyn and featured in its 2019 election manifesto.

These programmes have in common the fact that not only do they propose a complete transformation of the productive system around a decarbonized economy, but they place the public interest at the heart of this fundamental shift. The approach seeks to expand the scope of the public sector and public funding into broad swathes of the economy, such as energy, transport, mobility, and even construction and housing, as well as agriculture and food production. These radical visions of a green transformation include vital democratic control mechanisms for citizens and workers, in a bid to revitalize Western democracies by moving towards a resocialization of many parts of the economy.

But what, then, is the hybrid that is being put forward by the European Commission?

The Commission and its President, Ursula von der Leyen, have described the European Green Deal as an opportunity to ensure that the EU is in pole position when it comes to the energy transition, and to make it a technological and diplomatic frontrunner on climate change. At the heart of the Green Deal is climate action in the form of the Climate Law and the European Commission's proposal to establish an EU commitment to reduce greenhouse gas emissions compared to 1990 levels. While the European Parliament had voted to support a 60 percent reduction in greenhouse gases by 2030, the European Council ultimately settled on a 55 percent decrease by 2030 and a commitment to achieve climate neutrality by 2050.

These goals, while evidencing some level of ambition and a desire by the Commission to take a stand as a climate leader on the world stage, remain inadequate and come nowhere near the arrangements agreed upon to at COP21 in Paris in 2015, which assigned the various signatories their own carbon trajectory. Under the document signed at the COP, the EU was allocated a reduction target of at least 65 percent. Moreover, it is worth reiterating that, historically, the EU Member States taken together have been responsible for 22 percent of total global emissionssince the middle of the eighteenth century.

A Giant with Feet of Clay

To better understand the structure of the Green Deal, we need to look at its political and financial basis.

Even as the Commission trumpeted its 10-year plan worth 1 trillion euro to fund the Green Deal (equivalent to 100 billion per year), it also indicated that annual investments of 260 billion would be necessary to achieve the Europeane economy’s envisioned decarbonization targets. This demonstrates straight away that the financial resources needed are not there.

Even more surprising for anyone delving more deeply into the funding details is the structural insecurity of the financial package, based on a method that the EU has tried time and again: freeing up public funding to ensure and promote private investment, a set-up that was already put into practice as the Investment Plan for Europe, or “Juncker Plan”, named after the previous Commission President after the 2008 crisis.

While the expansive monetary policy pursued by the European Central Bank (ECB) and the guarantees offered by EU Member States ensure the lowest possible interest rates, every effort is being made to ensure that private investors have access to this money without widening and deepening the scope of EU public policies such as the Energy Union accordingly. The approach amounts to socializing the risks associated with investment in a Union where competition between countries is very much a reality, while leaving the potential benefits of the plan to the private sector.

The Just Transition plan, for example—the central plank of the Green Deal designed to limit the human costs of the energy transition—is quite thin gruel considering what it is supposed to achieve. The assurance that fossil fuel-dependent regions and workers will be compensated and trained for employment in the new sectors of renewables and green industry, backed up by a 100-billion-euro plan, is in reality only underpinned by the disbursement of 7.5 billion in European equity. Although the funds are intended primarily for the coal-mining regions of Germany, Poland, and Hungary, they do not represent a proper system of capital transfers between regions, which however would be absolutely crucial to foster true political and popular support for these plans.

In addition, the lack of safeguards in the distribution of funds and the absence of a proper reindustrialization plan for the affected regions makes it impossible to envisage the rebalancing of production in the EU and new value chains in a Europe triplely divided between the North, the South, and the East. Against this backdrop, the protracted economic recession that lies ahead risks increasing these disparities and fuelling institutional crises and impasses.

There is a promising list of programmes within these sectors, in particular the Farm to Fork Strategy to reform a food production system which, according to the Commission, is responsible for more than 10 percent of the EU’s greenhouse gas emissions. Another key strategic plank of the Green Deal covers the circular economy, which forms part of the European Union's new industrial strategy.

However, while these plans might appear ambitious on paper, the neoliberal structures in place within the EU, such as the Stability Pact, and the absence of harmonized fiscal measures represent major obstacles to any paradigm shift in the European system.

A Green Deal for Whom?

The best evidence of the inconsistency and contradictions casting doubt on the European Commission's own ambitions can be found in the EU’s major programmes. The most recent—and also perhaps the most striking—illustration of this is provided by the new Common Agricultural Policy (CAP) for 2021 to 2027.

Passed by the European Parliament following a proposal by the Commission, the text broadly perpetuates the model adopted by the previous CAP by devoting a very large share of the EU’s second-largest budget to the agricultural industry and industrial livestock farming. This makes it difficult to see how the target of 25 percent of agricultural land being devoted to organic farming can be met, let alone how new environmentally friendly local farming practices that preserve biodiversity (another key focus of the Green Deal) will be able to emerge.

Another area demonstrating the contradictions and limitations of the Green Deal is the EU’s relations with third countries. One form of such relations that has expanded greatly in recent decades is the signing of free trade agreements, either bilaterally, such as the recent agreement with Vietnam, or with other regional entities.

The proposed agreement between the EU and Mercosur is the latest example of the incompatibility of such a trade policy with ambitious climate and social components—already inadequate given the ongoing crisis—of a programme like the Green Deal. Mass imports of beef and the proliferation of monocultures, both major factors behind deforestation, are utterly at odds with the requirements set by the European Green Deal and in particular the ambition to align major policies with the target of climate neutrality by 2050. The issues surrounding the EU-Mercosur agreement highlight not only the preponderance of financial interests over any other type of consideration, but also the flagrant lack of integrated thinking involved in the Green Deal.

The desire to “outsource” emissions and environmental destruction to other parts of the world is very much implicit in this initiative. The focus on the use of private electric vehicles in Green Deal transport policies will directly result in the extraction of rare metals and lithium for batteries in the areas where such commodities are mined: Latin America, Africa, and Asia. Together with the sharp reduction in the budget earmarked for external action and cooperation in the latest version of the 2021–2027 European budget, we have good reason to be concerned about the EU’s current path.

The plan to reduce emissions within the European Union masks a territorialized social and environmental approach that is incompatible with tackling global warming—a problem that obviously faces the world as a whole—and works against the fostering of solidarity and cooperation vis-à-vis other nations, in particular the Global South, to which Europe owes am immense historical debt. The ambition to make Europe the first decarbonized continent by 2050 cannot be allowed to serve as a Trojan horse for the region’s corporate giants and financial big-hitters. Nor can it be achieved at the expense of its most vulnerable populations, as part of a “multi-speed Europe” or by bolstering the pressure on the rest of the planet.

Supporting the Green Deal in its current form would be tantamount to embracing these two paths forward, disregarding the need for change that recent crises have made so evident and that more and more European citizens demand. 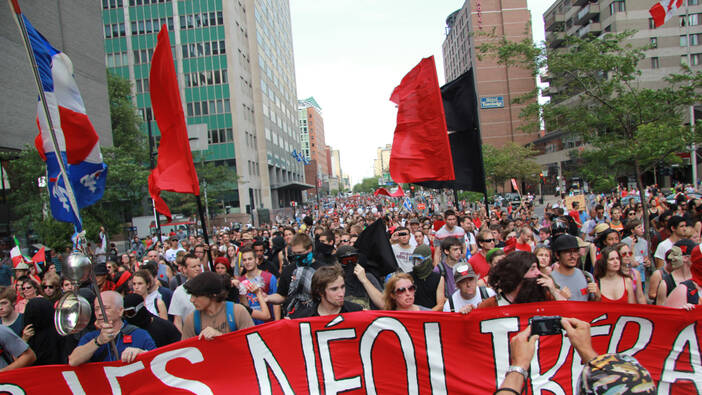