Esther Bejarano, née Loewy, was born to Jewish parents in the German province of Saarland in 1924. Her family repeatedly tried to emigrate as antisemitism grew increasingly vicious in Germany, but Esther and her parents never managed to get out. Her brother made it to the United States, and one of her sisters emigrated to Palestine.

Anika Taschke is the vice chairperson of the German Mauthausen Committee and a historian at the Rosa Luxemburg Foundation in Berlin. Translated by Loren Balhorn.

This article first appeared in Jacobin.

Following the Nazis’ ban on Jewish schools and other Jewish institutions, Esther was sent to the Ahrensdorf camp, an agricultural colony designed to prepare Jews for emigration to Palestine, and later to the Landwerk Neuendorf camp, where she performed forced labour for florist Fleurop. Esther’s parents were killed by the Nazis in Kaunas, Lithuania. Her second sister Ruth was murdered at the infamous Nazi concentration camp in Auschwitz.

The flower shop where Esther had been forced to work was soon shuttered, and Esther was taken to a so-called “transit camp” on Berlin’s Große Hamburger Straße. From there, she was deported to Auschwitz on 19 April 1943 with the 37th Osttransport. A total of 153 people from the Landwerk Neuendorf camp were sent to Auschwitz with her on that day. She survived the horrific journey in the overcrowded cattle wagon, without food, and surrounded by the corpses of other prisoners who had already died. In the Auschwitz-Birkenau death camp, she was registered as prisoner no. 41948.

Her musical talent, paired with a stroke of luck, helped her to become a member of the Women’s Orchestra at Auschwitz—a perverse institution maintained by the Nazis in the camp. The orchestra was forced to give concerts when high-ranking politicians and their families were invited for official visits, and often played at Nazi officers’ private parties.

More than anything, however, their job was to provide musical accompaniment when prisoners were marched in and out of the main camp gate. The orchestra often secured better food, clothing, and accommodation for the girls and women involved—doing a great deal to boost their chances of survival in a place like Auschwitz.

In interviews later in life, Esther often described her fellow prisoners’ despair. Many took their own lives before her eyes, committing suicide by throwing themselves onto the electric fence that surrounded the camp. Many other friends of hers died from malnutrition, disease, torture, or the excruciating physical labour they were forced to perform day in, day out. In Auschwitz alone, the Nazis murdered roughly 1.3 million human beings.

This systematic extermination of human life that the Nazis deemed “unworthy,” and the extermination of Jews in particular, remains a uniquely horrific crime without precedent in human history. Classical imperialism and especially the European settler-colonial projects in North and South America, and later in Africa, were also associated with the mass destruction of human life and entire civilizations, but it was not until Nazism that a state elevated the systematic extermination of entire populations to government policy. The Nazi Holocaust defied any military or economic logic—to this day, it stands for the unprecedented horror of fascist ideology and reminds every subsequent generation of anti-fascists to remain vigilant.

Esther fell seriously ill in Auschwitz, received treatment, and in November 1943 was transferred to the Ravensbrück women’s concentration camp with several other “Aryan” women. Because her grandmother was not Jewish, Esther was classified as a so-called “one-quarter Jew.” In Ravensbrück, she had to perform forced labour for Siemens, at the time one of the biggest German companies involved in manufacturing, engineering, and communications. She put up a very practical form of resistance there, engaging in small acts of sabotage on the assembly line.

As the Soviet Red Army rolled towards Germany from the East, many camps were evacuated and prisoners still able to work were sent on death marches. This also happened in Auschwitz: by the time the camp was liberated by the Red Army on 27 January 1945, only sick and weak prisoners remained in the camp. For this reason, Esther always insisted that, for her, 27 January was not a day of liberation. The day of liberation could only be 8 May, when Germany finally capitulated to the Allies.

Her personal liberation occurred in Lübz, a village in Mecklenburg-West Pomerania. During the death march, she escaped with a small group and met Russian and American soldiers in Lübz. It was there that she learned the war was over. They celebrated together: the soldiers set a portrait of Hitler on fire, they embraced each other, the prisoners danced and Esther Loewy played music on an accordion given to her by an American soldier.

A Life in Struggle

After the war, Esther searched for her parents. It was only then that she found out about their death. She found her brother’s address in the United States and her sister’s in Palestine and decided to emigrate to what would soon become the State of Israel in the summer of 1945. In Tel Aviv, she completed her vocal studies, sang in the Workers’ Choir Ron, was conscripted into military service, and married her husband Nissim Bejarano in 1950.

Esther and Nissim returned to West Germany with their children Edna and Joram in 1960. Esther still had West German citizenship and Nissim did not want to remain in Israel, citing both health reasons as well as his pacifist convictions. Later in life, Esther would repeatedly express criticism of the Israeli state’s treatment of the Palestinian population, which in her eyes was nothing less than a “catastrophe”.

Her path led the family to Hamburg, where she lived until her death. Esther opened a fashion boutique in Hamburg, sang in a band, and later joined the Union of Persecutees of the Nazi Regime/Federation of Anti-Fascists (VVN-BdA). When the neo-Nazi National Democratic Party (NPD) set up a table in front of her shop and the police tried to prevent counter-demonstrators from protesting, she raised her voice. She refused to accept that the state could protect Nazis, whether “new” or “old”.

Esther began to tell her story. As a witness to the horrors of the Holocaust, she brought her experiences closer to young people, warning against the threat of fascism and appealing to them to prevent it from ever happening again. In 1986 she founded the West German branch of the International Auschwitz Committee, an organization for survivors, former concentration camp inmates and their families, and relatives of those murdered. Today, the committee is open to anyone who wants to carry on the legacy of the prisoners and victims of Auschwitz.

Esther Bejarano campaigned in Hamburg and later throughout Germany against the rightward drift in society, against the NPD, the Alternative für Deutschland (AfD), and all the other right-wing parties that were on their way back into parliament in reunified Germany. In 2004, she gave a speech at a counter-rally against a neo-Nazi march, only for the police to aim their water cannon directly at the car in which Esther was sitting.

But for all her hard experiences in these years, she never let it get her down. She went through life with infinite strength, a great deal of courage, and an indefatigable nature. She always had an opinion on current events and politics and expressed it loudly.

This is probably another reason why Esther Bejarano was never invited to the official commemoration ceremony held in the German parliament on 27 January or even allowed to give a speech. Esther protested Germany’s asylum and migration policies, criticized the treatment of refugees at the EU’s external borders and in Germany itself. In addition, she always stood up for a just peace in the Middle East.

When the German government unrecognized the VVN-BdA’s non-profit status in 2019, she wrote indignant letters to politicians, repeatedly emphasizing the importance of the organization’s work. She admonished sitting finance minister and the Social Democratic Party’s candidate for chancellor, Olaf Scholz, with the following words: “The house is on fire and you are locking out the fire department.”

As a survivor of Auschwitz, she had a strong voice. But she never made things easy for herself or others—she consistently intervened in political debates, moving countless people with her story and her activism. At joint concert appearances with the left-wing hip-hop group Microphone Mafia, she sang Yiddish songs and danced enthusiastically.

Her message to subsequent generations was: “You’re not guilty for what happened back then. But you are guilty if you don’t want to know anything about that time. You must know about everything that happened—and why it happened.” Until the end, she fought for an active culture of remembrance, for the preservation and creation of memorial sites—places like the Rheinmetall forced labour camp in Unterlüß, Germany, or the Hanover railway station in Hamburg. It is sites like these where initiatives have been struggling for years to come to terms with the past—and have largely been ignored by wider society.

Especially when it comes to the use of forced labour by major corporations that are still in business today, Germany has largely failed to truly reconcile its past. Often enough, this fact isn’t even scandalized. Rather than open records to the public, many German corporations keep their archives under lock and key and hire in-house research teams to report on their corporate past.

With Esther’s passing, we have lost a powerful voice against injustice. Her death leaves a vacuum that now must be filled. On the day of her death, a poster went up in Berlin’s Kreuzberg neighbourhood that said: “Esther, we will continue, we are there, we promise! But it will be harder without you. Sincerely, your antifas.” The poster expressed precisely what I felt—because Esther’s words carried weight, her strength was impressive, and her network was seemingly infinite.

Now, we have to pause and say goodbye to a great woman who never gave up the fight for a fairer world. But after that, we have to keep fighting. Today we need people who take to the streets against Nazis, racism, and antisemitism more than ever. We need people who will never forget the Nazis’ crimes, who will carry on the stories and names of the victims and fight for the preservation of memorial sites and places of commemoration. This demands strength, courage, and cohesion, because anti-fascism was and still is not something to be taken for granted.

Even today, it is consistently persecuted and opposed by conservative politicians in the German government, whether by denying VVN-BdA’s non-profit status, anti-extremism laws, or deploying water cannons against anti-fascist demonstrations.

Today, 76 years after the end of fascism, we must continue to say—in the spirit of the Oath of Buchenwald written by concentration camp survivors after liberation—“Our watchword is the destruction of Nazism at its root. Our goal is to build a new world of peace and freedom.” But it is equally important to fight for the German government to recognize 8 May as a public holiday, and for a peaceful world without armaments and arms exports. So, we will keep fighting, Esther! Thank you for walking the path with us, this far. 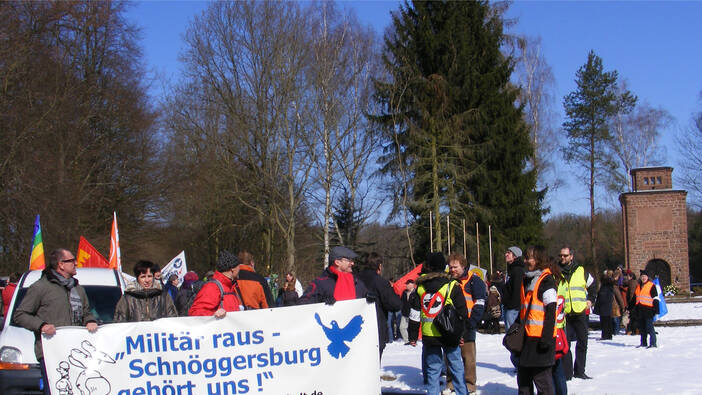 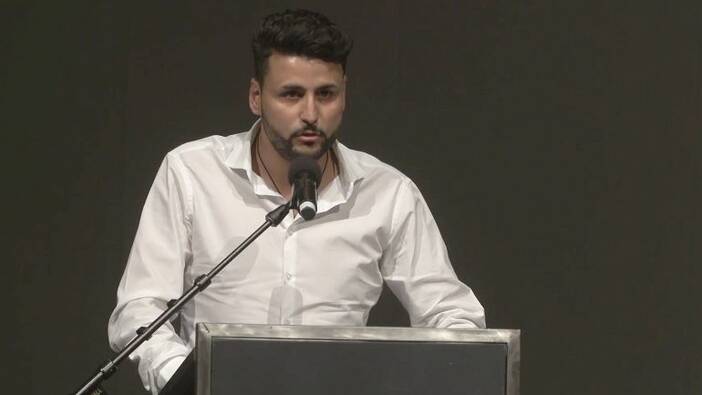