In the summer of 1980, worker protests of unprecedented magnitude swelled into a powerful wave of strikes that ultimately shook the People’s Republic of Poland to its foundations. At the outset, in July, the important industrial city of Lublin was the epicentre; 200 of its factories went on strike and public transportation was paralysed. By August, the spark had leapt over to the big coastal cities—the major shipyards were swept into the maelstrom of events, as they had been in December 1970. Unlike then, however, striking shipyard workers did not take to the streets to assert their demands for improved living and working conditions; this time they remained inside the shipyard gates and occupied their workplaces—a precaution against having to risk their lives in open confrontation with armed forces. Soon pictures from the occupied Lenin Shipyard in Gdánsk were being shown around the world; the state of the ruling system in Poland had suddenly been revealed as in a microcosm.

On the 17th of August an inter-plant strike committee presented the government with 21 demands. The first three concerned the right to organize and the freedoms of assembly and speech. With that, the gauntlet had been thrown down; no one in the country could retain illusions any more about the political character of this mass strike. The list of social demands included a few exaggerated ideas that—under the conditions of the time—would have brought just about any economy to its knees, for example that a publicly funded pension be introduced for women over 50 and men over 55. But it was the preceding demands for liberty that sent government figures into a spin.

After the Red Army’s victory in the Russian Civil War, the construction of a society oriented towards socialism had proceeded on the basis of a strict rejection of bourgeois society and, with it, the democratic substance that had been won through hard-fought class struggles, especially in the 19th century. Reflecting on her experience and analysis of the revolution of 1905–06, Rosa Luxemburg had warned that on the path out of the old society and into a socialist one the three fundamental civil liberties—she was referring to the freedom of opinion, the freedom of assembly, and the right to organize—should be treasured, and that they should at no point be surrendered—including during the state of exception constituted by the dictatorship of the proletariat (which in any case was to be kept as short as possible). The later development of Soviet state socialism, however, saw the dictatorship of the proletariat become a de facto permanent arrangement that legitimated a constitutional order strictly regulating, deforming, or entirely suspending those three civil liberties. After 1945, the experiences of socialist construction in the Soviet Union were transferred to the countries east of the Elbe that were to form the Soviet bloc—now, and for many years to follow.

If one looks back today more closely at the People’s Republic of Poland, two distinct features become apparent that had emerged powerfully by 1980. One was the self-consciousness and confidence of workers in the country’s major factories, which was explicitly nourished by experience with conflicts that had ended each time in bloody confrontations with the government. In June 1956, a wave of strikes broke out in Poznań that quickly swept through the city’s factories and ultimately led masses of workers to protest publicly on the streets. The government answered by deploying the military, and the protest was brutally put down and rapidly suppressed. In December 1970 workers in the major coastal shipyards went on strike, protests were again held on the streets and again met with a military response intended to nip the unrest in the bud. And in June 1976 there were intense, spontaneous strike actions against the announcement of price rises on foodstuffs, which once again drew tens of thousands of industrial workers onto the streets. In response to the repressive means that the government was determined to use against these workers’ struggles, writers, journalists, lawyers and other intellectuals formed the Workers’ Defence Committee (KOR), which operated illegally.

The second feature was an intellectual and cultural development in the years leading up to 1980 that had succeeded—despite the pall cast by rigid ideological and especially political directives—in extending the sphere of freedom of speech in the areas of research, art, and culture, so that the net of official guidelines became increasingly tattered and, in many domains, now had hardly any effect. During the late 1970s visitors to Poland from East Germany, for example, were—to the degree that they were able to follow events—surprised by the extent of freedom of speech. Admittedly, in Poland, too, this mostly concerned frequently invoked niches for scholarship, art, and literature. But the extent and scope of what had been achieved were comparatively impressive, and much of it was even reminiscent of conditions familiar from Czechoslovakia during the Prague Spring.

By August 1980 an intensified situation of unfamiliar proportions had arisen, which hardly anyone could expect would quickly return to the quiet of everyday life. Unlike before, those in power were no longer able to resort to repressive measures to quickly restore public order. Instead they were forced to embark on a difficult path of negotiations in full public view. As a result, the independent trade union Solidarność was sanctioned, a first risky but momentous step that would assist in breaking down the obstacles to the freedoms of speech and assembly and the right to organize in a society in which a majority of those in power still believed that under the prevailing conditions such a thing could not be permitted.

The ups and downs of the following months and years is well-known, since it took a number of agonizing years until the conflict was able to be resolved, namely, with the overcoming of a social structure that dated back to the October Revolution of 1917, and with the People’s Republic itself becoming history. Strikes in the factories were once again the trigger, because the summer of strikes in 1988 cleared the way for roundtable talks in February 1989, with which a year almost unsurpassed in terms of political drama began in a spirit of dialogue and compromise. Basically, both sides—on the one hand the rulers, on the other the Solidarność opposition—agreed not only to open a valve on the pent-up political and social pressure but to explore a safe and ever-widening channel that would point the way to a society with guaranteed civil liberties.

The downfall of Soviet-style state socialism, with its firmly entrenched dictatorship of the proletariat and the leadership of a party that always had a touch of absolute, i.e. pre-bourgeois, rule about it, was merely an external expression of developments internal to these societies which no-one could any longer stop. Nineteen-eighty-nine provided a powerful demonstration of the fact that this process did not only affect Poland—contrary to what some people, foregrounding certain features that they viewed in a negative light, had argued in 1980, and later in relation to other countries as well. However, the forms of mass protest in Leipzig, Berlin, Prague, and Bratislava were hardly reminiscent of Poland’s wave of strikes in the summer of 1980. Strangely enough, the Monday Demonstrations in Leipzig, which were held once a week and always only in the early evening, were quick to dissociate themselves from the Polish August 1980—“we’re not going on strike, we’re demonstrating after work, and we return to work in a disciplined manner the following day.”

The roots of this dialectic, too, go back the Polish summer of strikes in 1980. The red flags of the labour movement were no longer to be seen; instead, people displayed their allegiance to the red-and-white of the national cloth. The feeling of national identity played a major role, also and especially in the Lenin Shipyard, a firm which at that time primarily produced for export to the Soviet Union. Behind the social demands lay the seed of a firm conviction that Poland’s economy could be organized more successfully if it could be freed from the yoke of its big brother. In the course of the 1980s, emancipation from what was felt to be the straightjacket of Soviet-style state socialism proceeded increasingly along national lines, so that the idea of independence—in whatever form—became a powerful impetus, even the most important one. To illustrate, let me refer to one lesser-known example from the Soviet Union itself. In summer 1988, long before the autumn of 1989, tens of thousands of people took to the streets and public squares of Lithuania—at that time still a Soviet republic—to demonstrate for the country’s independence while displaying the Lithuanian national colours. 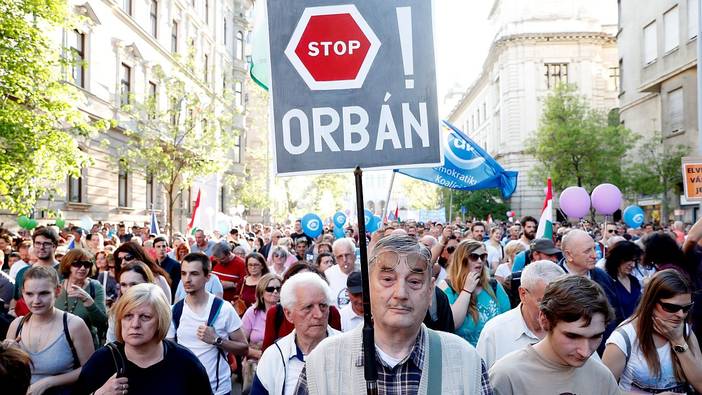