That’s what we think happened so far …

While the Paris Agreement was celebrated  as a unique success in Dec 2015, it was already clear by then that it would not lead to the necessary transformation that humankind needs to stay alive on this planet without further and stronger commitment. Not only are the provisions in the agreement non-binding, many countries of the global North are not even meeting their own insufficient climate goals. The Paris Agreement accepted a limited ambition of governments to keep global warming at a limit of 1.5 degrees or well below 2 degrees. In fact, the actual emissions-reduction-commitments fall even short of this goal. Current pledges will still lead to a global warming of 2.6 to 3.3 degrees by 2100.

With the limit of 1.5 degrees or well below 2 degrees that the international community agreed on, states have actually accepted a world that has to bear catastrophic impacts of climate change, such as sinking of small islands, flooding of coastal lines, melting of the arctic, dying coral reefs and a tremendous increase in climate-induced migration due to global warming. In a way, they have sanctioned a world of INJUSTICE and not equipped the Paris Agreement with instruments necessary to counteract this injustice.

The Paris Agreement means a continuation of market-based climate protection instruments or even increases the means for making money out of the climate protection business. Hence, it fuels the monetization of climate politics and the commodification of nature. The fact that there is something such as climate-induced loss and damage is carved into the Paris Agreement is a positive momentum as such. We endorse the work that has been done mainly by climate-vulnerable countries and civil society to reach this. However, the Paris Agreement also refuses any recognition of the ecological debt of the industrialized world and their duty to pay up for it.

In Poland, we will see if governments are ready to deliver real ambition and a meaningful rulebook or implementation guidelines. However, taking into consideration their past performance, we think this will be extremely unlikely. Instead, governments have shown that they feel more accountable towards corporate interests than to people and planet The UNFCCC is a space captured by corporate lobbyists. Representatives of the fossil or transportation industry, lobbyists of agricultural industries or nuclear power, are invited as so-called experts to sit in official talks and join the negotiations. During past COPs such industries even became sponsors of certain activities at the UNFCCC. We do not see them as part of the classical non-state observer league. Attempts by climate justice organisations to discuss and limit such kind of conflict-of –interest have only partially been welcomed by the UNFCCC, since polluters have still not been kicked out of the negotiations.

While we believe that climate justice is rooted in local struggles, a global challenge, like climate change, also needs to be dealt with on a global level. Therefore we think it is important to observe the UNFCCC process very closely to put pressure on negotiators, watch out for wrongdoings, improve what is there and dismantle what is wrong and unjust. We do this in solidarity with the climate justice movement.

Accordingly, the upcoming COP is crucial for showing how far the Parties take ambition to a next level and to a concrete level of action. The Paris Agreement itself is a compromise developed through consensus. To limit the horrific impacts of climate change, the struggle for climate justice must be seen as the “real” agenda 2030. However, the hundreds of pages long draft text of the Paris rulebook shows that there is still a lot to be done and that the process is too slow so far. Whether calling it “Paris 2.0” or “implementation guidelines”, the recent IPCC report shows, that there is no time to waste.

From the Parties we expect that there will be a clear commitment to action in the light of the IPCC special report and the outcomes of the Talanoa dialogue, not to let global warming exceed the 1.5 degrees and that they understood the broad hint of the urgent need for a fundamental transformation of the current  economic development model, i. e. governments have to dare to speak about and commit to full decarbonization as opposed to the cop-out solution of “carbon neutrality”… until when will remain a contested field. We stand with the demands of the climate justice movement … But it will not only matter to have the implementation guidelines. We think such guidelines must be rights-based, gender responsive and devoted to a participatory implementation.

There are expectations in the room by some NGOs that Parties will recommit to ambition in Katowice through a so called “Ambition Declaration” which shall stress the signatories willingness to review and revise their NDCs by 2020. This process has been initiated by the Marshall Islands and already found more than 30 signatories. However, we see that there is – also in the light of Common But Differentiated Responsibilities and Respective Capabilities – a special obligation for industrialized countries to pay their fair share when it comes to reducing emissions (also before 2020). Recent negotiations in Bonn and Bangkok however have shown that there is a certain atmosphere in the negotiation halls which tries to re-negotiate the historical responsibility of the global north. We are extremely critical of the role Germany plays in this sense by just kicking its climate targets into the garbage bin and promoting their renewable industries and insurances as “export hits”. We do not agree with the paradigm that not cutting emissions, but widening offsetting schemes is an ok solution. Further, we also think that additional justice dimensions must be considered, also within the climate justice movements. It will always be necessary to hold polluters (i. e. corporations) accountable. As such, we look at the proposed Forest Declaration of the Polish COP Presidency from a rather skeptical point of view.

The needs and interests of the most vulnerable people and communities are at the center of any climate action, ambitions or goal.

In Katowice we will see if the declared commitment to social and human rights (incl. gender equality) based principles as stated in the preamble of the Paris Agreement will be appropriately reflected in the concrete implantation guidelines. We will also learn if a full operationalization of the Local Communities and Indigenous Peoples platform will be made possible respecting and acknowledging indigenous people and in order to promote traditional knowledge and the participation of indigenous peoples in climate policies. As RLS, we see the needs and interests of the most vulnerable people and communities at the center of any climate action, ambitions or goal. So far, we have seen that e. g. indigenous communities often are not heard or that they even suffer from what we call false solutions, such as market-based climate protection instruments, mega projects etc. Climate change impacts affect women differently from men. We claim a global climate agenda that follows the principles of gender justice.

The recent twisting of the global north of the “Just Transition” concept as a mainly “defending jobs” or “justice for workers in the fossil industries first” connoted agenda is also to be seen as a far too narrow concept for the challenges ahead of us. As such, we are skeptical of the recent standing shoulder-to-shoulder of the ITUC and the endeavor of the Polish COP Presidency to push for a “Just Transition Declaration” (see Just Transition think piece).

Still, we are living in an era where polluters must pay and this does not just count for countries, but also transnational corporation need to be held accountable. As the IPCC report has shown us, but also as we experience already now (e. g. during this year as a year of weather extremes even in Europe), the times of bending and winding is over: money for climate-induced loss and damage must be put on the table. Countries / communities in need must be provided with unconditional financial means to adapt to and protect themselves from the impacts of climate change (see loss and damage think piece).

The biggest elephant in the room is capitalism.

The biggest elephant in the room is capitalism. The Paris Agreement and all follow-up agreements do not bring along the urgent need for a system change. Instead they either just offer cosmetic surgery or even are under risk of worsening injustices by introducing instruments that offer ways of making money out of the climate crisis. Accordingly, we see it as a consequent need to put the finger into this wound and offensively name the limitations of this process. Further, we see that just relying on the process of climate diplomacy will not change what needs to be changed. Thousands of people have been out there during the past months fighting for climate justice in their direct environment, through alternative means such as climate camps, campaigns or even civil disobedience. Without these movements, there will always be climate change, but no system change. 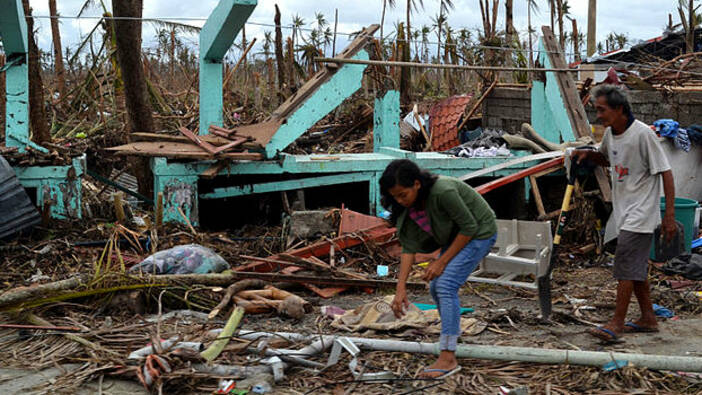 Loss and damage are euphemisms for ‘liability and compensation.’ 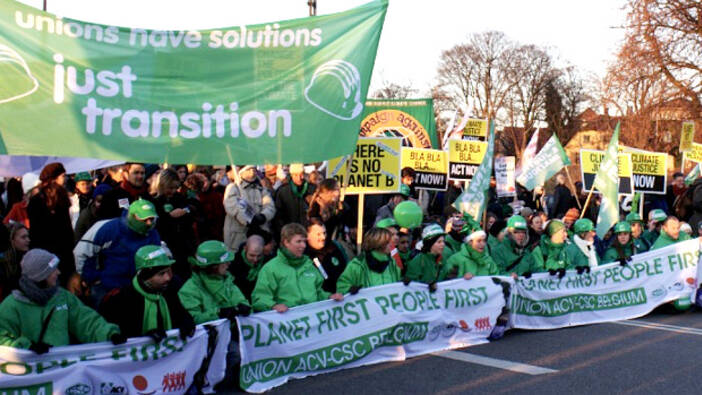 A Just Transition is first and foremost: a rapid and radical transition