Listening to the speeches by heads of state and government in the gigantic COP21 conference centre in Le Bourget, one could have believed it was Sunday. More than hard-bitten political negotiations, the sententious speeches resembled Sunday mass.

‘We’re the first generation to feel the impact of climate change and the last generation that can do something about it’, the great rhetorician Barack Obama began. Yet, with regard to US realpolitik, are such well-chosen words not worthless? Do we have to point out that the current US government is a driving force behind a surge in fossil fuel extraction? This is clear from fracking and permits to drill in the Arctic. Have we forgotten that sales of fuel-guzzling SUVs in the US are at their highest since the slump that followed the financial and economic crisis of 2008? We also need to remember that the US administration is pushing the TTIP agreement, with all its negative effects on the environment and the climate, and which will likely have a greater impact on the climate than any agreement that might be signed in Paris.

No beacon for the summit

Angela Merkel, who is known as the ‘climate chancellor’, but who is really a champion of the car industry, continued with the Sunday sermon. Merkel, employing the vocabulary of environmental organisations that still expect the summit to provide a satisfactory outcome, stated that the Paris Protocol would be ‘ambitious, comprehensive, fair and binding’. Should we rejoice? Hardly. Inevitably, the question arises of how Merkel’s Paris speech relates to German energy and climate policy. Why does ‘climate chancellor’ Merkel not state the date on which Germany will phase out coal? Given the emerging global climate chaos, doing so could provide a long overdue end to the fiasco surrounding the German climate levy (Klimaabgabe), an intelligent and moderate approach that met with a barrage of criticism from the German coal alliance and was perversely transformed into a subsidy mechanism for run-down lignite-fired power plants. A German announcement that it was phasing out coal would have provided an important signal for the summit because it could have created a dynamic.

Now, however, the summit’s dramaturgy, which was developed by the French government, is unravelling into nothing. The presence of the heads of state and government right at the beginning of the summit was aimed at slicing through the Gordian knot that has paralysed negotiations. Nevertheless, the effects these Sunday sermons will have on bitterly defended economic interests remains unclear.

Worse still, these sermons have the potential to undermine the momentum of those still attempting to achieve true change. Even the political elites are now delving into the vocabulary of a ‘wide-ranging transformation’. This is precisely what Merkel has demanded in Paris: a transformation ‘of the economy that affects all sectors, from industrial production, to mobility, insulation and energy production’. However, there has been no progress in these areas under Chancellor Merkel. Moreover, under the pretext of greening transport through electrification, the German government continues to support unlimited individual auto-mobility and actively supports German carmakers so that they can massively expand their global market share. The VW scandal, which illustrates the systematic and politically-backed erosion of (far too lax) environmental legislation, is only the visible part of such policies. As long as this does not change, talk of a ‘transformation’ remains a farce and undermines the true power of the term.

Before we can judge whether climate policy is actually progressing towards a transformation, we need to look at trade policies, and at industrial, transport, energy and foreign policy. For as long as changes are not visible at these levels, climate policy will remain nothing but a sermon. 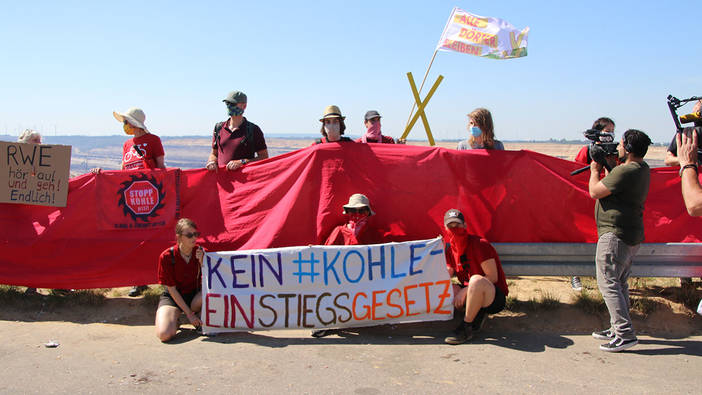